Home Article Singer Omarion Granberry and his girlfriend Apryl Jones has officially broken up. Find out the reason here

Singer Omarion Granberry and his girlfriend Apryl Jones has officially broken up. Find out the reason here 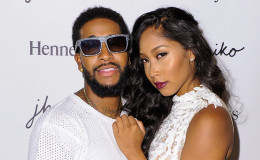 Omari Ishmael Grandberry (born November 12, 1984), better known as Omarion, is an American singer, songwriter, rapper, actor and dancer. He is best known as being the lead singer of the American R&B boy band B2K.

The popular singer and rapper of American R&B boy band B2K, Omarion Grandberry has officially ended his four years of marriage with his longtime lover and wife Apryl Jones. The news came as a shock to the media as the couple recently has a second baby together named Megaa Omari Grandberry.

So it is a fact that there’s no more ‘Love & Hip Hop’ for Omarion and Apryl Jones. The two broke up recently on July 10 and rumors were that the reason behind their breakup was Apryl's secret affair with another man! Sounds interesting, doesn't it?

Let's dig up more about this couple and find out further details.

Singer Omarion Broke Up with Apryl Jones  on July

The upbeat couple who previously starred on VH1's "Love & Hip Hop: Hollywood", have officially announced that they have finally called it quits after four years of relationship and two children together.

Omarion also posted a statement on Instagram showing great appreciation towards Apryl, and wrote that they hope to remain, friends, even though they are no longer together. He quoted:

“This is the only public statement I will make about a private matter, after this, I will not speak on or respond to any questions or comments on the matter … The beautiful and talented mother of my children for whom I hold the highest regard and respect, Apryl Jones, and I have mutually decided to end our relationship."

He further posted, “We continue to love and support one another and still share a common goal to remain, friends while being great parents to our children.”

Why did they break up? Rumors of Apryl Cheating on Omarion

As soon as the duo announced their split up, rumors and gossips about Apryl alleged affair with another man went viral.

Sources claimed that Omarion who has to travel a lot due to his projects and shoots found out that his so called wife was cheating on him and the singer out of anger and rage called it quits with his longtime girlfriend Apryl.

However, the rumors were immediately clarified by both of them as they told the media that none of them cheated or has an affair as such.

On an interview with E! News, Omarion revealed that they were simply out of love and things were not working out for them anymore and that's why they decided to part ways with mutual understanding.

The news created a lot of drama and their fans were disheartened by this announcement. Both of them seemed really happy together with their adorable and cute babies, Amei and Megaa.

Omarion even shared this happy moment and took a moment to appreciate his partner and tweeted:

“She put up with my Krazy. Now we have crazy kids. Thank you for giving me the two best gifts ever! A’mei & Megaa.They changed me forever! & Maybe I don’t express my gratitude enough. Because you’re solid! Thank you @aprylsjones just in case you needed a reminder on how awesome of a mother you’re."

As for Apryl, the source added that Apryl “will be moving out and getting her own place.” Apryl also tweeted a video talking about her and Omarion's breakup.

Apryl on Snapchat talking about her and Omarion's breakup: pic.twitter.com/dl6o9tDwto

Did Omarion have any affairs?

Prior to Apyrl, Omarion was dating his girlfriend named Jennifer Freeman. She is an actress from the United States and mostly popular for her TV series 'My Wife and Kids'.

Together they have also appeared in the movie 'You Got Served'. However, their relationship did not last that long and they ended it in 2005.

Well, although the has broken up, it seems they’re going to still raise their kids together and work together too. The rest remains to be seen.