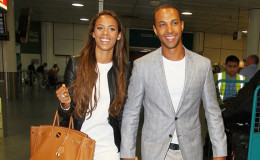 The singer and television presenter Rochelle Humes and husband Marvin Humes are all set welcome another member in the family. Let us peek in their personal life a bit.

The sensual and super sexy singer Rochelle Humes with her super dashing and extremely hot husband Marvin Humes are all set to welcome their second child in the world.

Rochelle is a part of UK’s one of the hottest girl band “The Saturdays”. The group is undoubtedly comprised of people worth watching; in fact, you can’t take your eyes off the hot pieces of cake. Rochelle joined “The Saturdays” in 2007. Born and raised in the UK, hands down she is one of the fashionable celebrities in the show biz.

Talking about her early career, she started in the S club 8 which was formed in 2001 and aired in CBBC which basically is BBC’s children version. She was there for around 5 years. From 2005 to 2007 she was a part of a group called The Tigerlily. From 2007 she has been a member of the girl group The Saturdays. The band’s debut album chasing lights reached top 10 in the UK’s albums chart. Since then she has been a huge stir in the music field. She also gained popularity in a television career. Since 2014 she has been co-hosting BBC’s children in need telethon.

Marvin too is a singer, television presenter, radio DJ and former member of the boy band JLS. Before getting super serious with her present husband, Rochelle has dated many hunks from footballers to yet another musician/ songwriter.

Well, what’s done is done! The two got engaged in December 2011, after one year of dating each other. Then exactly one year after getting engaged they got married in 2012 at Blenheim Palace. They are quite consistent on dates. Similarly, one year after tying the knot, the couple gave birth to a beautiful baby girl who they named Alaia-Mai. The adorable kiddo turned 3 this year.

Is the sexy duo giving birth to another Humes in 2017?

Yes! The news is now official that Rochelle is expecting another baby. She showed her baby bump to the world and looked like they were on cloud nine after giving the official announcement in their social media account. She was wearing a black turtle neck jumper after returning from BBC Radio Two Studio and was looking amazingly hot. Besides her, husband Marvin was looking dashing himself.

On November this year Rochelle showed her concern how baby Alaia was constantly pressuring her to get her a sibling to play with. Looks like little Alaia is getting a surprise soon. The due date is expected to in 2017. We all hope the happy family all the beautiful wishes.