Sports Anchor Erin Coscarelli is dating boyfriend Jonathan Chironna. Are they getting married? 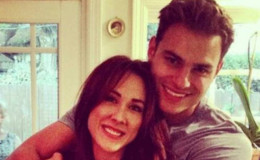 Erin Michelle Coscarelli is an American anchor, who currently works for NFL Network. She was previously the host of NFL Network's weekday morning show, NFL HQ until cancelled in 2015.

The hotter than the hottest sports anchor Erin Coscarelli who hosts  NFL Network’s weekday morning show NFL AM has won hearts of millions of her viewers and she has unbelievably more than thirty-seven thousand followers on her Twitter account.

The ice breaker here is that, is this desirable and beautiful host dating anyone or not? Well, we are here to break the ice for you guys. Be ready!

Is Erin married or dating someone?

As per sources, Erin is dating someone. She is in a committed relationship with her boyfriend Jonathan Chironna who is an owner at CM Pizza Corp and Salad Concepts Inc.

The duo has been dating each other for a long time and they have not revealed to the media the details of how they met.

However, the lovers seem to be enjoying their togetherness a lot as they are seen posting many pictures of each other on social media sites.

So, it can be assumed that 'marriage' is out of the question for this lovely couple and they are more focused on their respective careers right now and might want to take things slow.

Who is Jonathan Chironna?

Jonathan Chironna is an actor/business owner. He has worked in films like Page's Great and Grand Escape, Please Hold (2016) and much more and currently owns CM Pizza Corp and Salad Concepts Inc.

Not only that, he is also the founder of Eat Mean Green at Salad Concepts that serves, fresh and healthy high-quality salads.

Her career hit off  in 2008 when she covered the world of extreme sports by reporting on Summer XGames 14 including competitions like Skate Big Air and MotoX Best Trick for which she gained quite a lot of fame.

Back in USC, Coscarelli was hosting her own show covering the USC football team, announced a sports radio show and produced, edited and reported at Annenberg TV News for USC’s own TV station.

Besides her work, she is also a member of the Young Professionals Council of Children’s Hospital Los Angeles, a nonprofit, academic, pediatric medical center that provides more than 97,000 children with pediatric health care.

A few months ago, the duo celebrated their anniversary on July 3rd. So, it is true that the couple loves each other very much and cherish and honor their presence in each other's life.

All in all, we do hope that to see this cute couple starting a beautiful family together.