Sportscaster Michele Tafoya and husband Mark Vandersall's Married life. Do the couple have any children? 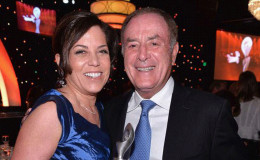 As sporty as she sounds, Michele is quite a sportsman herself in her married life tackling every difficulty that came along and having a never giving up attitude for her family and children.

She admits that she has been juggling family and career and has at many times left her networks to spend time with her husband and family.

Michele Tafoya is currently married to Mark Vandersall, who is a financial advisor of Vandersall & Associates which is a private wealth advisory practice of Ameriprise Financial Services, Inc. The couple has two beautiful children, one son and an adopted daughter whom they adore the most.

The couple got married in the year 2002 and together have spent 16 years of successful married life. Her husband, Vandersall, is currently the co-founder of Hub Names LLC.

Moreover, there has not been any rumors on the media about them getting a divorce or having any affairs, so it seems Tafoya and her husband is pretty happy with their relationship.

Michelle got pregnant at the age of 40

Michelle and Mark have two children now and are living happily. However, the story has a heart-wrenching past as Michele had four unsuccessful pregnancy moments.

At the age of 40, when their hope of having a child of their own started to crumble little by little and when they began to think that adoption was their only choice, Michele got pregnant and delivered their first child who was a baby-boy in the year of 2005.

Both the couple were very happy with a new member added in the family. On looking into Mark’s Twitter account we found some really adorable pictures of him and his children.

Her hard work and dedication have made her a well-known face in American television industry. She is a sportscaster by profession. Since 2011, she has been a reporter for NBC Sports, featuring as the sideline reporter for NBC Sunday Night Football.

Here is the video of iVillage's Kelly Wallace interviewing the mom of two, Tafoya to find out how she prepares for game night and juggles motherhood with one of the highest profile television positions in football.

She has also become successful to win various awards and honors. She got her first Emmy Award in the category of Outstanding Sports Personality-Sports reporter in the year 2012. She received the same award after two years in 2012.