Stephanie Abrams divorced to Mike Bettes. Is she married again? 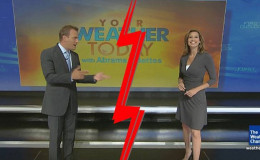 Stephanie Abrams a famous meteorologist on The Weather Channel, is a charming and hardworking woman. She has given divorce to Mike Bettes, but is she single or has she been married again?

Stephanie is clearly a famed star in the television, with a set of many loyal fans all across the United States. She has this charming and witty nature and add that with her photogenic looks. She is also a well, known American TV meteorologist, who is currently working for The Weather Channel.

She was married to her co-host in The Weather Channel's show called AMHQ:America's Morning Headquarters, named Mike Bettes. The couple met in the studio and started dating each other and eventually married each other.

They both were good together. Everyone thought that the couple are deeply in love, but seems everyone has their differences and so did Stephanie and Mike. The couple ended their marriage by a divorce. They didn't have any children between them.

Is she married again or does she have any boyfriend ?

Stephanie is very serious about her privacy and even after divorcing Mike Bettes she hasn't spoked any word about it. After her divorce there is no news about Stephanie dating anyone. There seems to a rumor circulating Stephanie and her coworker Jim Cantore are dating each other.

Trying to convince @jimcantore to be late to a meeting and join me for a @weatherchannel FB live at 9:05 am today! Double tap if you think he should be tardy to the mtg and host the FB live with me!! PS Hope to chat w you all on FB shortly!

But Stephanie has cleared the rumor as they are just friends and good friends at that.

Meanwhile, her ex-husband has already tied the knot with freelancing CNN meteorologist named Allison Chinchar. They have a son as well. He is quite happy in his new life and posts regular pictures of himself and his wife on social media.

Happy Thanksgiving from the Bettes Family

Stephanie is enjoying her single life

Even though she has gone through a divorce, Stephanie has already moved on. She regularly posts picture of her and her friends going to some events.

When "the thunder rolls and the lightning strikes," @garthbrooks gets delayed! Thankfully "I have friends in low places," so even though we were home and in bed before he played his first song we still had a hilarious and memorable night! @nuebyshani & @amyfreeze , you beauties are magicians for being able to stay! @dzukofsky & @rmedgie , we'll get um next time! #RainDelay For the record.... the lightning always strikes first and the thunder rolls after. #FactsAreFacts #Science #WellLetItSlideCauseItsGarth

She has been often seen doing some dance off challenges or playing with invisible basketball with her coworkers.

Even though she is enjoying her single life, many of her fans would love to see her with someone. There is no news about it as of now and all the rumors are all false. Stephanie is single with no news about her marriage.