Suki Waterhouse is dating her new boyfriend Richard Madden, Find out about her previous affairs 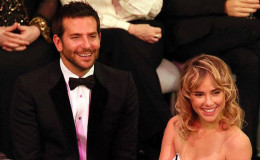 Suki is known for her charming and cute face. She was recently spotted with Dominic Cooper and then with Richard Madden. Let us find out who she really dating right now.

Alice Suki Waterhouse is a British actress and a model. Alice who was rumored to be dating many top Hollywood actors like Bradley Cooper, James Marsden and Dominic Cooper has currently rumored to be in a relationship with Game of Thrones star Richard Madden.

The couple was spotted multiple times hanging out with each other. Is she really dating him or is it some another baseless rumors, let us find out.

In 2013, Suki and Bradley started dating each other when they first met at the Elle Style Awards. Suki said, "We were introduced and hit it off almost immediately."

She also added that when they were dancing at the after-party, Bradley asked Suki if she would like to go to a club with him.

Suki was totally into Bradley as the handsome hunk is very popular among the ladies due to his good dance moves.

Suki said that she was impressed by Bradley's dance moves and that may be the reason the two of them came so close to each other.

Break UP with Bradley

After two years of dating, on March 19, 2015, Suki and Bradley called it quits as there were differences among the couple.

It was said that Bradley was looking to start a family with Suki but Suki refused as she said that she was still young and wanted to focus on her career. She also said that she loves Bradley but

She also said that she loves Bradley but she isn't ready to start a family right now. She does not want to be a mother.

After breaking up with Bradley, Suki was in numerous relationship with many celebrities like Diego Luna, James Marsden and, Nat Wolff, but it looked like that Suki wasn't getting the type of relationship she wanted as she juggled from one guy to another.

In July 2016 Suki was spotted with Dominic Cooper in London's Hyde Park. The media clicked many pictures of them together and it looked like that the couple was having a great time with each other.

One source even said that Dominic put his hands on Suki's waist as they were talking.

However, again in 2016 after few months from spotting with Dominic Cooper, Suki was seen with Game of Thrones star Richard Madden.

The couple reportedly were introduced to each other by a mutual friend and according to our sources the pair is having a great connection between them.

Suki has changed many boyfriends over the year, let us see if she and Richard can stick to each other and be together forever.