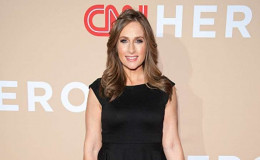 Alison Kosik an american business journalist and a business correspondent. She has been happily married for eight years and has a lovely family who supports her.

Celebrities are mostly infamous for short-lived marriages and relationships. However, Alison Kosik has been able to maintain the “happily married” status for eight years now.

Allison Kosik was married twice before she finally married Adam Huckett. Allison, 45, was initially married to a mystery man from Woodbury.

Her first marriage was wrecked due to personal differences. This caused the end of the marriage approximately three years later.

After her separation from the anonymous man, Allison got married to the American Pat Bergeson. Her second marriage was also over shortly after.

Celebrities are people too. Allison must have been highly disturbed after two broken marriages. However, women are known to clear the mess, get themselves together and move on.

After two unsuccessful marriages, Allison finally met the man made for her, Adam Huckett.

Allison Kosik and Adam Huckett have a daughter

Allison and Adam were in a long-term relationship before finally tying the knot in 2008. Adam Huckett is a New York-based banker. The couple is blessed with a daughter named Daisy Mae Huckett.

Allison is in her mid-forties and but looks half her age. She is at the highest point of her career and has a very hectic schedule.

Despite having a very busy life, she has been able to continue her married life happily. This kind of family requires a lot of understanding, patience, and dedication which they seem to have in them.

No rumors of Allison Kosik and Adam Huckett’s separation

A rumor about a famous personality is spread faster than anything, but there hasn’t been any rumor about Allison and Adam’s separation.

Nor has there ever been any report about either of them having an affair with anyone else. This makes us think that all is well with the Huckett family.

Celebrities are famous not only for their professional work but also for their private lives. Everybody digs deep into celebrities’ lives.

We can only imagine how hard it must be for a celebrity to live their life while millions of eyes are constantly watching them.

However, Allison seems to have learned how to avoid that kind of interference from their lives. She knows how to keep her professional life away from her personal life.

Allison as a very successful journalist, a devoted mother, and a loving wife has not only proven to be a professional role model but also a personal role model for many.

Fingers crossed for this lovely couple who seemed to have found the right person for them.