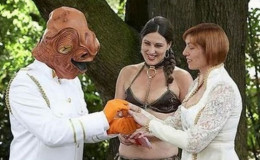 These list of weddings are the weirdest one and it happens only once in a while. So let us witness the weirdness together.

Marriage is a beautiful ritual, let it be in a Hindu culture, Muslim, Christian or Jewish. The orthodox way of performing wedding ceremony is unique in different places but have equal significance. But some of the marriages leave other raising their eyebrows.

People have been known to exchange vows in a normal church in front of the holy spirit but some of them have proved that weddings can be anywhere as long as there is love in the air. Let's see some of the totally strange places and weird ways people have used to get married.

As weird as it sounds, many people nowadays are crazy about jumping off the plane with their significant other making their way down while shouting out loud the vows.

We wonder what exactly jumping from the sky signifies here? Let us see how the pictures come out while the 'bride' and 'groom' from Atlanta when they stole their first kiss. 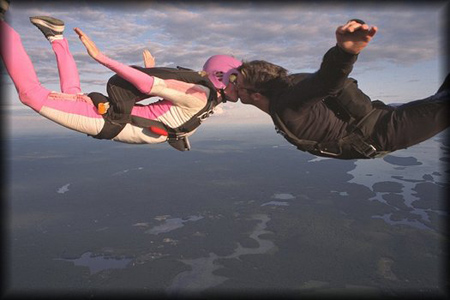 For Lindsey and Dannieal, wedding in the land seemed so common and boring, so the couple decided to scuba dive and get married under water in front of floating fishes and sea flowers.

When the duo got to the bottom, they had to learn how to move in the water as the bride was supposed to walk down the aisle.

Hats off to these guys for completing the ceremony without getting drowned. 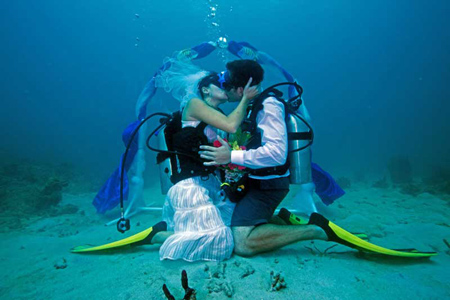 Another adventures yet a crazy way of getting hitched is by jumping from the 130fts high tower with a rope tied on the legs. Bravo! Who came up with these ideas?

In the year 2015, in the UK, 33-year-old Ross Basham and 27-year-old Hannah Phillips got married hanging themselves through a rope. 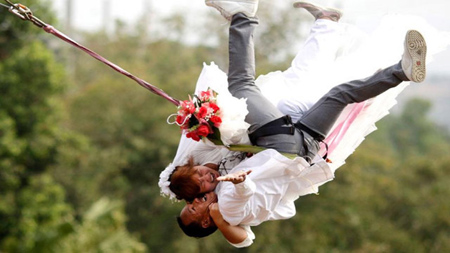 The bride looks terrified, and obviously, she is not enjoying the ride. This is opposite of elegance. 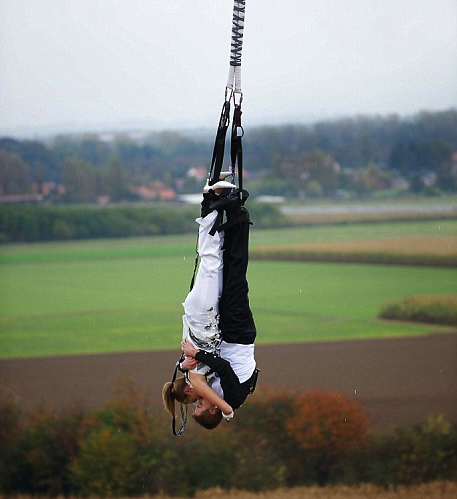 To be honest this one looks cute and they are really enjoying the togetherness. But undoubtedly this is the weirdest way to be married.

One of the many amusing ways to get married is high up in the sky. Honestly, this way is the weird as well as cutest one.

Nothing is near comparable to the breathtaking views of mountains and especially if there is going to be a sunset soon.

And the wedding is the "cherry on top". 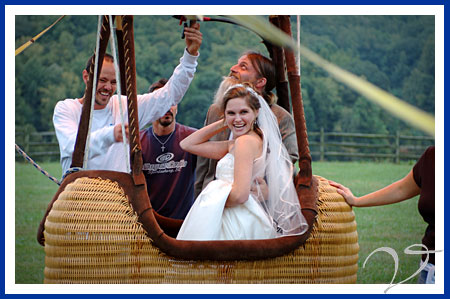 How great it would be to be alone in the clouds on your wedding day with your partner.

The first couples who initiated this weird way of getting hitched were Noah Fulmor and Erin Finnegan.

They got married in G- Force One "Vomit Comet" which provides weightlessness for people who wants to experience zero gravity without taking the risk of flying into space.

In 2009, above the skies of South Florida, Noah and Erin chose the unconventional way of tying the knot which received many positive responses as many people are following them. 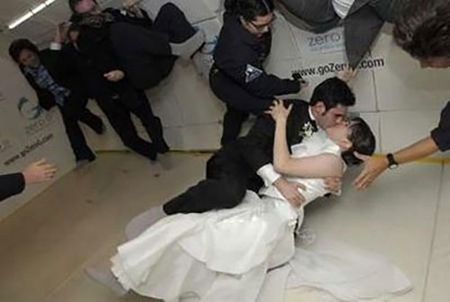 One couple in Japan performed their ceremony inside an ice chapel. We wonder why they decided to do so. It's possible because the bride wanted to feel like princess "Elsa" inside the icy tower. 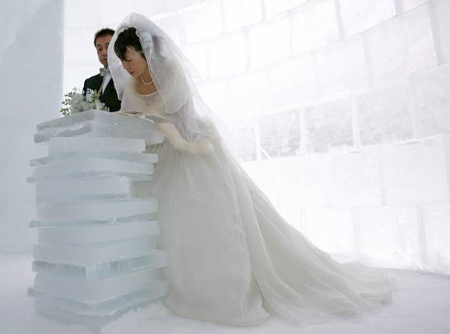 Many couples in China ran a mini marathon while taking an oath for their wedding. That is so weird. What's much weird is that it was not a normal marathon.

The grooms carried there to be wives in their back and ran to win the race. 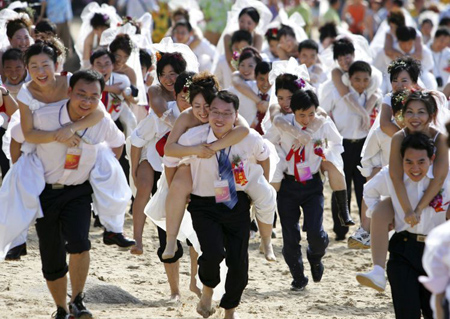 But to be honest, saying I do will be so exciting when your husband is carrying you all the way from the beginning.

In the same way, a couple got hitched while running Chicago Marathon in 2015. Stephanie Reinhart and Mark Jockel tied the knot infront of a huge audience including their friends, family as well as stangers.

In all the above list though the wedding ceremony was strange the people were not. All of them were madly in love and wanted to celebrate their day in a different way.

However, on this one, a woman was married with a snake. Pretty weird right?

In the year 2006, a Hindu women from India married a Cobra saying that she fell in love with that creature. Almost two thousand people witnessed that weird wedding. 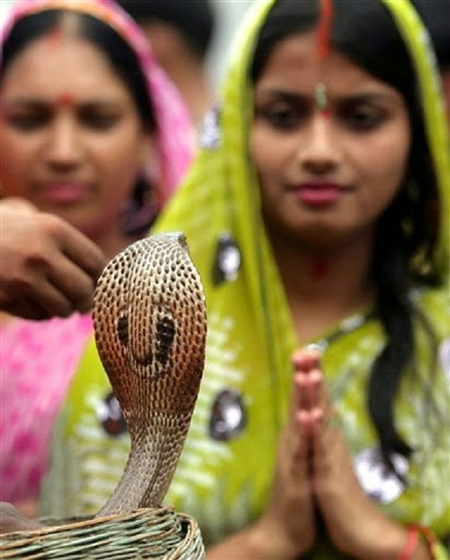 The elderly believed that this marriage will bring fortune and luck to the village and everyone in the village.

In some parts of the village, these kind of marriages are performed against the will of a bride, but in this case, the bride claims that she fell for him.

In Germany, a man marries his own dying cat. It is illegal to marry an animal in Germany, so Mr. Uwe Mitzscherlich paid an actress 300 Euros to officiate the marriage. 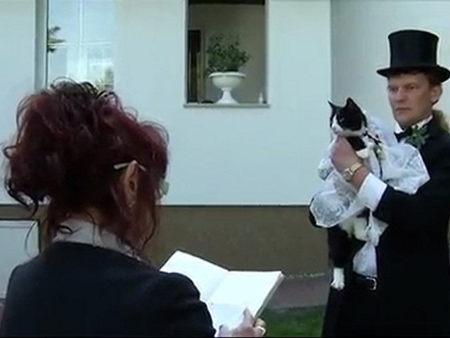 According to Mr. Mitzscherlich, he wanted to tie the knot before his asthmatic cat Cecilia dies. The groom and cat were together for a decade and Cecilia was very trustable and dear to him.

The number one weird marriages of all which the world has witnessed might be this one. In 2007 a Chinese man named Liu Ye married a portairt of himself. 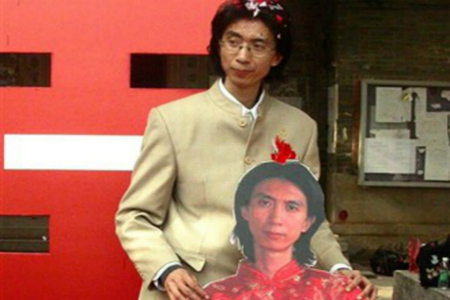 This man thought that it is better to marry himself than to be single for life. The best part of this marriage was a red dressed foam board cut-out of himself.

He also confessed that he is a narcist and wanted to challenge the orthodox way of the world.

Marriage is something that can make or break the happiness of ones life. And it is an individual's wish to get married in a certain way. We would like to wish everyone all the best for their future.