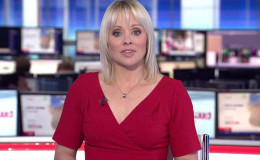 Alex Hammond, also known as Alex Quinn, (born 1974) is a British television presenter, reporter and a horse racing tipster, working for Sky Sports News and At the Races.

If you are crazy about horse-racing and the sports related to it, you sure would recognize the gorgeous British television presenter and horse racing tipster, Alex Hammond.

Alex with her fun and exciting attitude on-screen has managed to gather millions of fans and now her fans wants to know more about this brilliant reporter.

Well, it might break the hearts of all her admirers to know that she is already married! Yes, that's true. The lead anchor at Sky Sports News and At the Races was happily married with her husband, Scottish Jockey, Richard Quinn but later they got divorced.

Let's find out more about them here.

Alex, who previously was a racehorse trainer herself, married the popular Scottish Jockey, Richard Quinn in 2007.

Well, it's obvious how they met as both of them were working in the same field. Soon, they started dating and one thing led to another and the duo finally decided to tie knots and exchange vows.

They wedded in a private ceremony with only a few close friends and families attending the wedding in 2007.

We know there's always a different side to a story and the same can be said for this pair. Although the pair seemed really happy when they got married, they started having problems with their marriage that eventually led the couple to part ways.

The pair got divorced just after 19 months of their marriage which came as a shock to most of their fans.

According to DailyMail, the Scottish rider, Richard, confirmed the media that the beautiful blonde wife moved out from the Berkshire home that they shared with two children by previous marriage.

He told: "We've split up,' says Quinn, 47. 'Alex is keeping her horses here, but she's not living here any more. We are still in contact. We want to remain friends.''

What are they doing now?

As for now, Richard Quinn still races in the Goodwood Racecourse from where he has achieved more than 26 victories so far. He once retired in 2006 due to his health complication but later returned the following year.

On the other hand, Alex serves as the lead television presenter at Sky Sports News and At the Races. She seems to be doing really well in her life, strongly focusing on her career.

She is seen very active on her social media sites, visiting race course and enjoying it the most!

Great night at the @skybet Cheltenham festival in Leeds. Gave the new @hollandcooperclothing cape a whirl ??

Love this crew! Great night on @at_the_races Now it's time for a few days of Christmas cheer. Have a good one everyone ????????

Also, the pair has not been rumored to be dating anyone so far, so both are possibly single right now.

All in all, it's clear that both of them are doing pretty well in their life and we wish them best wishes in their future endeavors.