TV Show host Jamie Colby divorced her husband Marc Wallack in 2011. Is she getting married again? 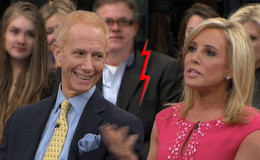 Jamie Nell Colby is an American anchor. She works for Fox News Channel as a news correspondent and an anchor. She also hosts America’s News Headquarter.

Jamie Colby has experienced an amazing journey from being an accomplished Attorney to Award-Winning Broadcast Journalist. The versatile and stupendous woman now works as the lead host of 'Strange Inheritance', which airs Monday through Friday at 9:00 PM/ET on the Fox Business Network (FBN).

Despite a successful career and huge achievements, Jamie's personal life has not gone quite smoothly since the past few years. Her married life came to a full stop when she divorced her husband, Dr. Marc Wallace who is now a reputed surgeon working at New York's St. Vincent Hospital.

Well, we know you all want to know the reason behind this tragic ending so let's find out how and why they got a divorce.

Jamie's second marriage to St. Vincent's Hospital chief of surgery Marc Wallack, ended in 2011. So, with who was Jamie married to before Marc?

According to sources, Jamie was married in her early twenties with her first husband however, details of her first partner is still a mystery to the world.

Jamie and her first spouse also have a son together who currently lives with his mother. After the divorce with her mystery husband, she got married to Marc.

When Jamie and Marc made the public announcement about their separation, it shocked all their fans and the media too.

Their divorce was out of the blue as the pair seemed to be even happier and well-bonded after going through the major heart surgery of Marc back in 2010.

On an interview with FOX News, Jamie shared their painful experience of Marc suffering from heart crisis and has a quadruple bypass surgery.

She also told the sources how she took care of him during such times and how she supported him and maintained his health and managed everything for him.

However, who knew that the couple was actually having irreconcilable issues that landed them on the sinking boat.

Reasons for their divorce is still a mystery but, some sources claimed that about 20 years of gap in their age could be one of the reasons. However, there is no plausible evidence to prove this matter.

Did they have any child?

Jamie and Marc did not have any child together even though they were together for a couple of years. Jamie has a son from her previous marriage.

However, she has not shared much about her son whom she's raising by herself.

However, sources reveal that this duo still is on good terms despite their divorce.

Is Jamie dating anyone?

Colby, 46, is still a desirable, vibrant and beautiful woman who can get any man she wants. But after her separation, she has not been rumored to be seeing or dating any man of which we know.

She is currently single and is focused on her work. Perhaps, she wants to make a big out of her career rather than search for a man to settle down.

She also manages time for her friends and family and goes for the dinners and parties with them. It seems she's enjoying her single life very much.

Not sure I could love a friend any more than @marilynchinitz you are the #realdeal @cipriani #newyork #sanfrancisco you are next! #strangeinheritance #roadtrip

Well, we wish that Jamie soon finds the right man for her life and settle down happily with everlasting marriage and a wonderful family in future.