Home Article Valentina Paloma Pinault is the Daughter of Salma Hayek. Know about her family

Valentina Paloma Pinault is the Daughter of Salma Hayek. Know about her family 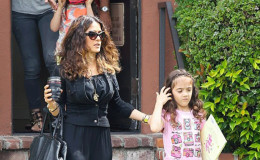 Being a Bi-Lingual herself, Salma Hayek is married to a French billionaire and this couple is always in the spot light. But they are not only the ones. Even at the age of just 8, Salma's daughter has stolen some of the limelight too.

People no longer search for their own nationality while getting married when their hearts meet. Such is the world these days, which is good, isn't it? Salma Hayek, who is an American actress, whose nationality is Mexican is married to French billionaire Francois-Henri Pinault.

The couple has been in limelight and also been known as powercouple. For Salma, Francois has ultimately been the right man even when she admits to have dated other men perviously.

Salma's Relationship With Her Daughter

It is not only this couple who is into the limelight, but their now 8 years daughter, Valentina Paloma Pinault also is. Valnetina has been a star since her birth and has walked in the big red carpet movie premiers at profile art exhibitions which many people dream of.

Salma Hayek and her daughter Valentina

Salma Hayek and her Family

Being born to a Mexican mom and French Daddy and living in America, it won’t be difficult to imagine her daughter being bi-lingual, but Salma proudly states that her daughter is not bi but tri-lingual since she was at the age of 2 and a half.

Valentina Pinault happy with her parents

Valentina Paloma Pinault, as Salma’s daughter’s name is speaks three languages fluently- English, Spanish and French as reported by her father. And not only this, Salma is getting taught French language by her daughter. The funny part is that Salma isn't a good French speaker and her daughter mimics how she speaks awful French.

She has also captured some room in her mom's Instagram too where Salma loves posting cute pictures of her in front of her millions of followers.

Salma Hayek is very much happy and proud to have been married to Francois because not only he loves her but he also supports her. Infact, even when Salma had thought about quitting her career, he was the one to encourage her not to do so.

He not only made her go back to film industry, but also said that he wanted to watch her work.

It seems like her husband is more driven towards work along with his family and he is the reason that Salma is still seen on big screens. Guess her fans should Thank her husband for that.