Home Article "Nothing about Epidermolysis Bullosa is simple", know Its Signs, Symptoms, and treatment

"Nothing about Epidermolysis Bullosa is simple", know Its Signs, Symptoms, and treatment

Epidermolysis Bullosa is a rare gene connective tissue disorder characterized by blister formation in response to mechanical trauma. It may occur in anywhere on the body but it commonly appears at sites of friction and minor trauma.

Epidermolysis Bullosa is a rare connective tissue disorder characterized by blister formation in response to mechanical trauma. It may occur in anywhere on the body but it commonly appears at sites of friction and minor trauma.

Based on the reports, the National Epidermolysis Bullosa Registry, EB is estimated to occur in 20 newborns per 1 million live births in the United States.

The exact population affected by the issue is still unclear but reports suggest that about 25,000- 50,000 people in the United States is suffering from the cause.

What is Epidermolysis bullosa (EB)?

It is a group of inherited connective tissue diseases that cause blisters on the skin and mucosal membranes. More than 300 mutations have been identified in this condition.

The issue may occur on any part of the body but mostly, it appears at the site of friction and on hands and feet. The EB result from genetic defects of molecules in the skin.

The condition was brought to public attention in 2004 in the United Kingdom through the Channel 4 documentary The Boy Whose Skin Fell Off depicting the real-life story of Jonny Kennedy, an Englishman who suffered the same issue.

The condition is also better depicted in HBO documentary My Flesh and Blood in 2003.

As the skin of the patient suffering from EB is as fragile as a butterfly's wings, the condition is often termed as 'Butterfly Children', 'Cotten Wool Babies', and 'Crystal Skin Children'.

The disease is classified into following types:

Symptoms associated with epidermolysis bullosa vary depending on the type. Some of the signs detected in the issue are listed below:

EB is usually inherited. The disease gene is usually transferred from one parent who has the same issue to offspring or it may be passed on from both parents.

It may also arise as a new form of mutation in the affected person that can be passed on. 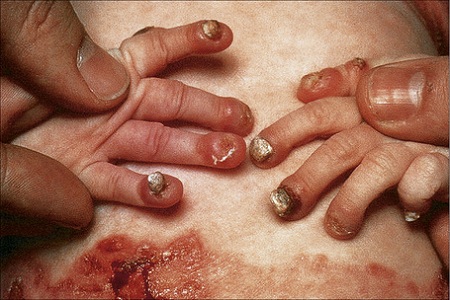 In people with healthy skin, there are proteins that anchor the epidermis and dermis preventing the two layers moving independently from one another.

In people with EB, the two layers lack the anchoring protein resulting in the extremely fragile skin.

EB can be diagnosed by skin biopsy, blood sampling, and genetic testing.

The test can be carried out from the 10th week of pregnancy.

There is no cure for EB but recent research has focused on changing the mixture of keratins produced in the skin. 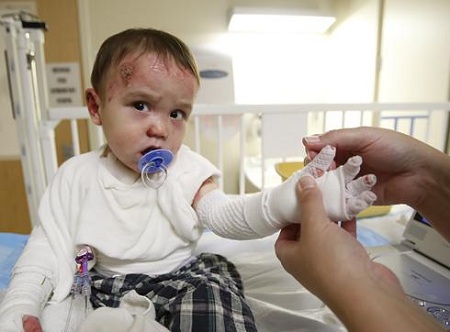 Gene therapy and cell-based therapy can be effective to improve the state and improve the quality of life for the victims.

It's necessary to visit and consult the team of specialist for overall care.

It's not possible to prevent epidermolysis bullosa but following steps can be effective to prevent further infection.

The disorder is prevalent in every racial and ethnic group affecting both sexes. Hence, if any skin related issues are spotted, it's better to visit the physician as soon as possible.