Home Article What is the reason behind the divorce of Tarek El Moussa and Christina El Moussa?

What is the reason behind the divorce of Tarek El Moussa and Christina El Moussa? 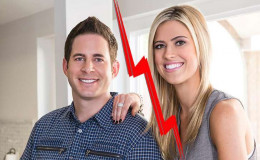 Christina El Moussa married her Flip or Flop co-host Tarek El Moussa in 2009. Her first child, a daughter named Taylor, was born in 2010. In 2015, she welcomed her first son, Brayden. She and Tarek split in 2016.

America's favorite couple, Tarek El Moussa and Christina El Moussa have decided to part ways and has filed for a divorce recently on 12th December.

The rich and famous real estate investors and popular television personalities who are famous for hosting the HGTV series Flip or Flop, Tarek and Christina are no longer together after the most controversial incident involving guns and a suicide attempt.

The former couple who tied the knot in 2009 were previously having marital issues which later seemed to be irreconcilable, so they called it quits after seven years of marriage. Well, this news has already topped the charts on the web and now everyone wants to know the reason behind this separation. We will tell you all the details of this story right here.

Real Estate King and Queen Tarek and Christina Divorced: Why?

When the real estate market plunged in 2008, Tarek and Christina came up with a great idea of buying distressed homes, renovating them and selling them with a good profit.

However, the couple who has created millions of happy homes and revived many old houses, are now on the verge of losing their own home and marriage. How ironic is that?

According to UsWeekly, the Flip or Flop co-stars were seeing marriage counselors for quite a few months before announcing their divorce.

The duo was also accused of being involved in the scary incident back in May when the entire California Police Department, including Deputy, showed up to the couple's house in the middle of the night after being reported of "possibly a suicidal male with a gun running around".

Although the pair settled the matter with the police as well as the media as "an unfortunate misunderstanding", it definitely tells a different story.

From the reports by TMZ, those who witnessed the incident told TMZ that they saw Tarek leaving his home with a gun in a hand, shouting followed by Christina who was crying and following Tarek in the middle of the night.

When the police caught up with the reality star, he spoke in his defense as he was not intending to hurt anyone or himself but just 'blowing off some steam."

As no violence was recorded, the officials did not file any charges. Instead, they seized five guns from their residence during that time.

After this incident, their relationship started to face several ups and downs and the sources even reported that the couple has stopped living together.

When their divorced was confirmed, the pair made a statement with People Magazine, saying:

"Like many couples, we have had challenges in our marriage. We had an unfortunate misunderstanding about six months ago and the police were called to our house in an abundance of caution. There was no violence and no charges were filed."

Without reacting much, the pair also added: "During the process, we are committed to our kids and being the best parents we can be. We will continue to work through this process civilly and cooperatively, and plan to continue our professional life together."

Married in 2009, the El Moussas have two wonderful children together: a 6-year-old daughter named Taylor and 1-year-old son Brayden.

After the divorce, Christina has been spending most of her time with her children whereas Tarek is busy shooting for their popular reality show Flip or Flop.

Disney days are the best days ??

The further details of the divorce and child custody are yet to follow and we really hope that the duo remains good friends and continue their amazing work together.