Is Nargiz Zakirova divorcing her husband Philip Balzano? Find out her married life and children 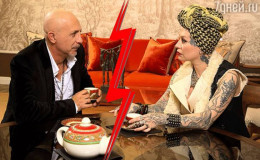 Nargiz Zakirova is currently heading for a divorce with her husand Philip balzano. Let us see what is really going on here.

Nargiz Zakirova is a Uzbekistani singer who rose to fame after she won "The Voice" of Russia. Nargiz has been married three times. She was first married to Yernur Kanaybekov but the marriage was short-lived as Yernur died in 1997.

Later, she tied the knot to Philip Balzano. However, as per current rumors, the couple is getting a divorce. Let us find out the truth in detail.

Nargiz has been married three times in her entire lifetime. Her first marriage ended in a divorce in 1995.

Then Nargiz tied the knot to Yernur Kanaybekov but their marriage was short-lived as Yernur died in 1997. The incident came as a shock for Nargiz but one cannot change the fate.

She then married Italian musician Philip Balzano. However, the couple is currently heading towards a divorce as it seems the marriage is not working well.

The couple first met each other at a restaurant where Nargiz was singing an Italian song. Philip was very impressed by her voice and they started seeing each other.

Unfortunately, in 2016 the couple decided to dissolve their 20-year of married life. It seems the reason is some financial disagreement among the pair.

The couple has filed for the divorce in the same court where they registered for their marriage.

Nargiz was earning good money in Russia while Philip was not earning that much. She has to send money all by herself for the sake of her children's life.

At this time Philip was in huge debt.That may be the reason that there is also news that Philip has asked for 38 thousand dollars in the divorce contract between the duo.

Nargiz was very depressed about the incident. But Philip remains adamant and he said that he wants $ 38,500 in compensation.

A picture that she posted on her Instagram account showed the letter that Philip has sent her.

The picture shows how Philip has asked for compensation money.

Nargiz has a total of three children all from a different husband. Daughter's name are Leila Zakirova, Sabina Zakirova and, a son Auel Zakirov.

Before filing for the divorce, Philip and Nargiz were taking care of their three children together. At the time of divorce Nargiz's daughter, Leila Zakirova said that she won't leave her father's side.

She said at this difficult time she will support her father.

Nargiz is now single, and she is currently depressed about her split with Philip but the singer is strong and we hope that she will bounce back.