Home Article Who Is Jeremy Shada Dating Currently? Know In Detail About His Current Affairs And Relationship

Who Is Jeremy Shada Dating Currently? Know In Detail About His Current Affairs And Relationship 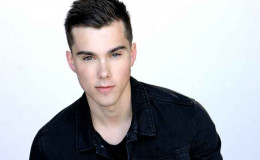 It is not necessary that everyone values you as long as there is one special person who values you the most.

Some people start off dating early whereas some others wait for the perfect match till their late life. An adult celebrity's love affair often becomes a hot news. People wants to know whether a given celebrity is in love, if yes then with whom?

American actor Jeremy Shada is a young and handsome man of 22. So, if you wanna know about the relationship status of Jeremy, then you are in the right place to begin exploring.

Who is Jeremy Shada Dating Currently? Know His Current Relationship in Details

The young and astonishing artist, Jeremy, has earned a huge fan following by the age of 22. It is no wonder that countless girls pursue this handsome guy.

But for his girl fans dismay, Jeremy is actually in love with a beautiful lady named Carolynn Rowland from New York City. Carolynn is a ballet dancer who dances at the Los Angeles Ballet.

This duo has been in a relationship for nearly a year. Jeremy started dating Carolynn from December 11, 2017. The most prominent sign he posts with Carolynn's photo is the heart emoticon.

There is no news about their relationship yet but what more authentic source do we need than the lovebirds themselves?

Both Jeremy and Carolynn are open about their relationship in the social media. Though they do not directly call each other their boyfriend and girlfriend, their activities and reactions in social media are proof that they are really in love.

On 14 February 2018, on the occasion of Valentine's Day, Jeremy posted a photo of him and Carolynn and wished her a 'Happy Valentine's Day'. 3 days later, he posted a photo where he is in a romantic mood with Carolynn. His caption read: "The couple that poses together." Moreover, they post photos with beautiful captions dedicated to one another on 11 of every month.

There is no information regarding who proposed first and how long it took for one to convince the another. However, the important thing is that both of them enjoy sticking and spending time together.

Carolynn is in no way different from Jeremy because she also posts photos with Jeremy too often. Moreover, this lovely duo shares the same ice cream, milkshake, and any other food.

Likewise, whenever one of them is going away for some time as well as when they meet again they never miss posting photos together. Carolynn often mentions Jeremy and calls him 'sweeter than honey'. Furthermore, once she posted a photo in which Jeremy is carrying Carolynn on his back, and she said "Head over heels."

Carolynn seems to believe in her fortune for having such a handsome and famous man by her side. Just like her, Jeremy is thankful to the year 2017 for giving him such a beautiful girl. So, there are sufficient reasons for anyone to believe that Jeremy is officially becoming Carolynn's man sooner or later.