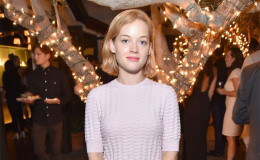 Suburgatory fame actress Jane Levy is romantically involved with her new boyfriend Thomas Mcdonell. She is a victim of bad marriage which last only seven months.

Sometimes good things fall apart so better things can fall together and something similar is happening in Suburgatory star Jane Levy's life and you may curious how? Well, after splitting with her short-time husband she seems to be involved in a new relationship.

Alright if you are interested to know more about his mystery boyfriend than you have to go through our article and here we begin!

The beautiful actress is in love, yes you heard it right she is dating her Suburgatory co-star 'Thomas McDonald'.

It was believed that they came closer on the set of Suburgatory but no one has an idea of their relationship as they prefer to keep their love life private.

However, on 2015 when duo spotted together at the Miu Miu show during Paris Fashion Week Womenswear their rumored relationship got official.

thank you for having us @miumiu

It's been almost 2 years of their official relationship and Jane is no longer shy to admit Thomas as her boyfriend.

They are happily enjoying their love life and we hope their relationship gets stronger and deeper every day and last forever.

Prior to Thomas, Jane was married to Portuguese actor Jamie Freitas. On March 3, 2011, Jane and Jamie tied the knot in a private ceremony where their close friends and family members were invited.

However, their relationship did not last longer so after seven months of marriage on October 31, 2011, it was announced that they were to going to separate.

On April 2013, Levy filed for a divorce, citing irreconcilable differences which come as a big shock for everyone as she never speaks about her wedding but suddenly she came out with divorce news.

The super gorgeous actress began her acting career through the television series 'Shameless' as she portrays the role of Mandy Milkovich.

She has done numbers of movies and television series such as; Fun size, Nobody Walks, Evil dead, Don't breath and much more which represent her amazing acting ability.

However, 'Suburgatory' helped her to earned name and fame as well as she received many critical acclaims for her work at the show.

She is at the highest peak of her career which means definitely she has an amazing net worth. According to the source, she succeeds to achieve $3 million net worth from her wonderful career.

At last, we want to wish her all the best for her upcoming projects and a romantic love life with her boyfriend 'Thomas McDonald'.