Home Article Will Lance Stewart marry his girlfriend LIZZY WURST? How long they are dating?

Will Lance Stewart marry his girlfriend LIZZY WURST? How long they are dating? 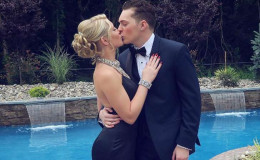 Lizzy Wurst and Lance Stewart are vine superstars who have been dating for quite sometime. They have videos about getting engaged but are those just pranks?

Lance Stewart is a popular 20-year-old vine star who has enormous followers on twitter and youtube. He is in a relationship with youtuber Lizzy Wurst.

Currently, He is dating Lizzy Wurst. It was first known about Lance’s girlfriend when he posted a video called wet t-shirt prank on girlfriend.

Lizzy and Lance did a Boyfriend/Girlfriend challenge for Lily Wurst’s first youtube video. According to the video, Lizzy and Lance first met during their high school where Lance always caught her staring at him in the hallway.

Later Lizzy found Lance on Instagram and followed him, then unfollowed him and then refollowed him just for him to notice that she followed him and made an account just because Lance had one. She ended up messaging him there and that is how their love story began.

Lizzy and Lance talk about their relationship in the 10 minutes of the video and mention the minor details about their early relationship like their first date, first kiss and who said “I love you” first.

Apparently, they had been talking for two months before actually going out on a date. According to Lance, on their first date, he took Lizzy to watch the movie 42 and felt really awkward when he leaned to kiss her for the first time.

He also said that Lizzy was the first one to say “I love you” in their relationship. They also talk about each other’s likes and dislikes and got most of them right.

When asked what Lizzy loves the most Lance answers by saying “me”. They are also very frank about each other’s annoying habits and laugh at it.

As far as the marriage is concerned it does not look like the couple is in hurry. However, Lizzy and Lance have both met each other’s parents.

In fact, Lizzy met Lance’s father on their first date when he came to pick them up because Lance did not have his license. In his youtube videos, Lizzy seems close with Lance’s family.

In his youtube videos, Lizzy seems pretty close with Lance’s family. In one of Lance’s video, Lizzy asks Lance’s mother for her ring and puts it on.

She says, “It’s big but I love it” to which Lance replies by saying, “Everyone’s gonna think that we are engaged or something”. When Lizzy says that they are engaged, Lance answered no.

In a different video, Lance gets on his knees and acts like he is proposing to Lizzy only as a prank but Lizzy takes it seriously and starts crying. Later on, Lance apologizes for taking the prank too far.

So even if Lance keeps playing pranks on his girlfriend about their engagement, it doesn’t seem like the vine star has any intentions of tying the knot any time soon. Fingers crossed for the cute couple!