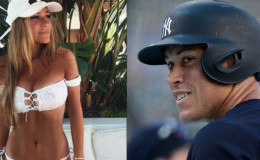 Looks like hitting the 56 homers wasn't enough for the Yankees player Aaron Judge.

The star player hit another outside the stadium but this time with his rumored smokin' hot girlfriend, Jen Flaum. The couple was spending some quality time together at the Nobu restaurant in New York.

This is the first time since the pair has been seen together since the pair attended the U.S. Open championship in October. It looks like something is cooking between the couple.

Aaron and Jen stepping out of the Nobu, Source: TMZ

Well, many of you might be unaware of the fact that Jen is a big Yankee fan. That explains her closeness with a Yankee star player. She recently graduated from the University of Michigan.

As you all know Halloween just went by and the 25-year-old outfielder and his rumored girlfriend dressed up as a couple. Aaron as Clark Kent whereas Jen became his on-screen love interest, Lois Lane.

Even though none of the party has announced anything regarding what's going on between the two, we certainly have so many ideas, don't you say!

Aaron and Jen attending US open together, Source: Fabwags

For the same festival, the pair was once again spotted buying a pumpkin at the Wightman Farms in Morristown, NJ, over the weekend.

The couple rumoredly started dating from this year. For now, both of them are keeping their relationship low profile.

We're sure they'll announce their relationship once it's official.