Yoo Jae Suk and his wife Na Gyung-Eun Married since 2008. 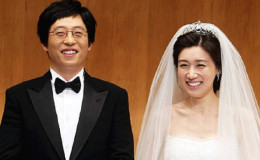 Yoo Jae Suk in his entire life has made people happy with his comedy. This funny man has been married to his fellow announced Gyung Eun. The couple is very happy with each other because who wouldn't be happy with a comedian.

Yoo Jae-Suk is a South Korean comedian best known for his role as the host of popular programs like Infinite Challenge and Running Man. He is nicknamed the "Nation's MC" for five consecutive years. Yoo married Na Kyung-Eun a South Korean announcer. As Yoo is a nationally famous comedian the story about his proposal to Kyung is very funny. The couple has one child between them born on May 1, 2010.

Yoo Jae-Suk was born in Seoul, South Korea. He was the eldest child out of three. Yoo attended Seoul Institute of the Arts, but he was unable to complete his graduation due to the fact that he has to do several stand-up comedy in a day and the schedule was interfering with his studies. According to our research Yoo had no prior relationship in his past.

Yoo knew about Kyung as she worked with him on the show Infinite Challenge. When asked by the media that what type of girl Yoo would like to marry, he said he would likely to marry another fellow announcer just like him as their personality would be perfect for each other.

He also added that Kyung was the one that first approached Yoo. He added, "Na Kyung Eun approached Yoo Jae Suk first and told him that she was a fan. Yoo Jae Suk was surprised, but the staff members around them got the hint and started rooting them on."

As funny Yoo is on screen it seems he is also funny off screen as well. According to reports, Yoo proposed to Kyung in a car. He proposed Kyung in a car by saying let us live happily together and then he put on a ring to Kyung. He said that "I actually thought she would cry out of joy but instead she laughed like no tomorrow."

Welcoming their First Child Together

The couple got married on July 6, 2008. They welcomed their first child, a son, on May 1, 2010. The couple was very happy about it. Due to his hectic schedule, it was often said that Yoo is not able to give time to his son, but in an interview, he said that “I don’t go anywhere else. After filming is over, I go back home immediately and play with [my son].”

The couple's marriage is going very strong and it seems that they will not get separated due to the fact that Yoo is a comedian and he will always make his family laugh and in the end that is what everyone wants, to laugh every day.