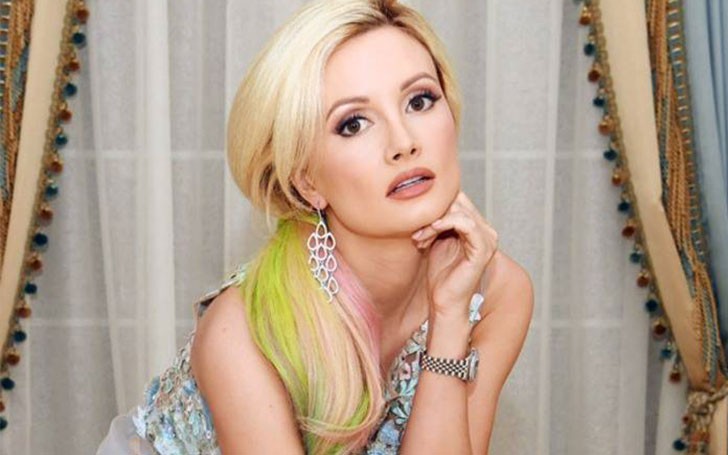 The model, showgirl and television personality Holly Madison is known to be pregnant with her second baby with husband Pasquale Rotella.

The model, showgirl and television personality Holly Madison is known to be pregnant with her second baby with husband Pasquale Rotella. The couple, who has now been married already, have a child, a daughter named Rainbow Aurora Rotella together. They announced their first pregnancy in August 2012 and their first baby was born on the 5th of March, 2013. It seems that the happiness and bliss of married life are suiting the couple pretty well as they are ready to have another child together.

Madison who has been in a relationship with Hugh Hefner previously had a wedding with boyfriend Pasquale Rotella on the 10th of September 2013 after the birth of their daughter. They started dating on 2011 and their relationship has been going on pretty well since then. The success of their relationship can be explained well by the fact that they are already expecting their second baby together. They announced their pregnancy to the general public in the January of 2016 and it has been known that the couple’s baby is due in August of the same year.

The Down the Rabbit Hole’s author has expressed her excitement over the imminent arrival of her baby. The sex of the baby on the way has not been known but she has revealed that she feels that it is a boy. Their eldest child Rainbow is reportedly rooting for a girl and wants a sister soon. Madison, who gained a pretty good amount of weight during her last pregnancy and lost it shortly afterwards, has explained that she is not putting any pressure on gaining weight and will consider liposuction if her weight does not manage itself soon. Holly had been on the news tabloids previously for his relationship with the much older Hefner but now has been settled back into her happy blissful life with husband Pasquale Rotella.