Home Article Michelle Beadle may be getting married to Actor boyfriend Steve Kazee soon. They have dated too long

Michelle Beadle may be getting married to Actor boyfriend Steve Kazee soon. They have dated too long 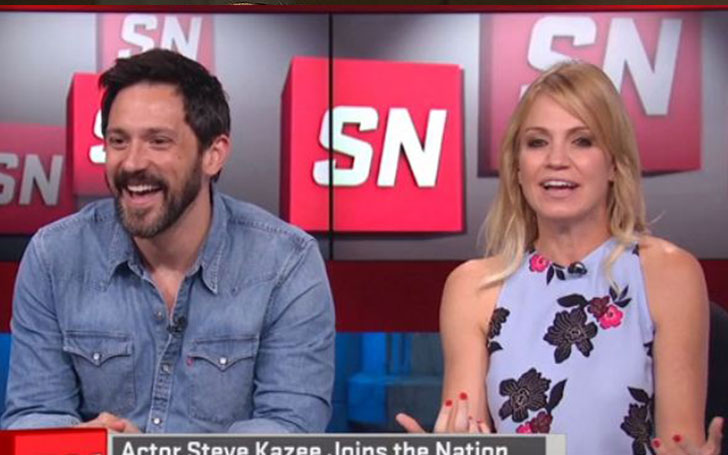 Being in the spotlight and keeping the love life secrect is paradoxical. So is the attempt of michelle beadle and steve Kazee.

Its been quiet a while since the Grammy award-winning actor Steve Kazee and reporter Michelle Beadle are in a relation.One thing we are sure about is; they are dating each other even though none of them have spilled a bean out to the media.Ok, how do we know it? lets see!

I guess this is enough right! Jumping up to the point of interest;When are they getting married?

They both share same kind of interest.Both of them are fond of dogs as well as pro wrestling.
Enlightning the recent event, the lovebirds were spotted on the WWE entertainment mega event Wrestel Mania week.

They have been spending alot of time together in these past few months.
What makes us think that they are getting married?
Steve Kazee and his girlfriend Michelle Beadle have not spotted with anyone else since they've been in relationship as well as we have not heard any rumors about any incident that will make us think that they are getting seperated or they have started seeing someone else.Beside that we always get to see their lovely faces together in their official instagram accounts.Steve and his girlfriend are in their comfort zone and will  would surely have a stable and a cordial relation in the future.
For now,there is no rumor of them dating or seeing anyone beside themselves.But beadle recently gave a hint to the media about what the couple have planned to move  with.In one of the recent event Kazee and his girlfriend Beadle admitted that they are likey going to take a step up in their relation which they are having right now and might get engaged very soon.