Home Article When are Jools Oliver & Jamie Oliver going to have their 5th child?

When are Jools Oliver & Jamie Oliver going to have their 5th child? 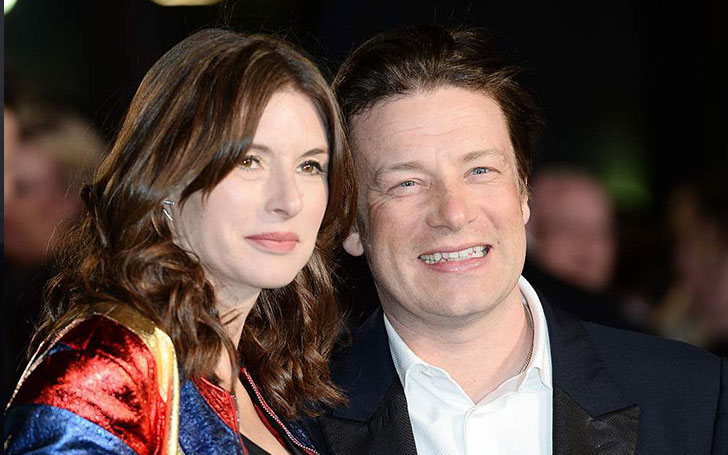 Pregnant Jools Oliver made her first public appearance just hours after it was revealed that she will be expecting her fifth child with husband Jamie on Thursday, March 17.

The news of 40-year-old Celebrity Chef Jamie Oliver and his wife Jools Oliver expecting their fifth child has been flying over the internet. After Jamie confirmed their big baby news with a tweet on his Twitter account, a day after he supported the Government's campaign for the sugar tax on soft drinks, the news has been finally official. The couple was seen at the premiere of Eddie the Eagle in London with Jools, 41, dressed in a jumpsuit which showed her baby bump as well. They both seemed happy and delighted; Jamie  revealed that their child will be the last one on the Red Carpet.

They already have three daughters- Poppy Honey Rosie, Daisy Boo Pamela and Petal Blossom Rainbow and a son too named Buddy Bear Maurice. Jools has been married to Jamie for 15 years now. The couple met in 1993 and tied the knot in 2000 after dating for seven years, before welcoming their first daughter two years later. Mrs. Oliver conceived her first child using IVF but had the other three naturally.

They both had on previous occasions spoke about their desire to have a baby soon in various interviews. In January last year, the duo had said that they were planning to expand their family and Jools seemed pretty excited about being fully prepared if she found herself expecting again. Now that they are having a baby, their wish seems to be coming true.

After numerous reports and speculations that flew around the internet about Jamie seen alone and possibility of a divorce early this year, this news comes as a proof that they were just rumors and they still are pretty much happy together even after 15 years.

Jamie found fame on The Naked Chef in 1999 while Jools now runs her own children’s clothing line Little Bird.