Will Nick Jonas marry his girlfriend actress Lily Collins? They have confirmed dating. 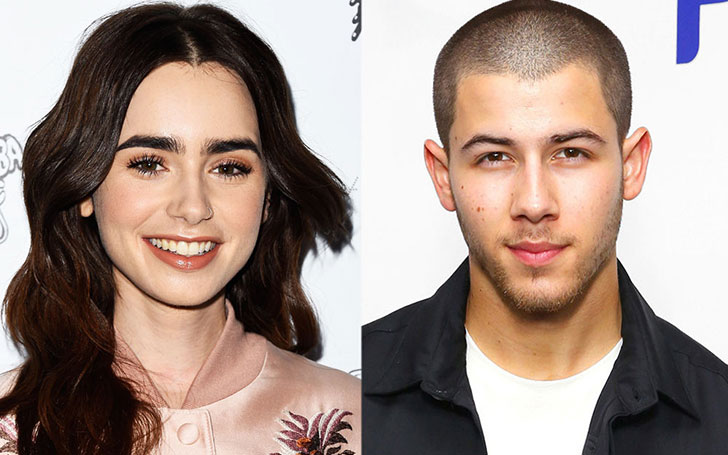 An American singer, songwriter, and actor Nick Jones is so much famous regarding his professional life. He began his acting career at the age of seven and released his debut single in 2002. His personal life is not that much hidden where he is being linked with various strings of Hollywood beauties.

An American singer, songwriter, and actor Nick Jones is so much famous regarding his professional life. He began his acting career at the age of seven and released his debut single in 2002. His personal life is not that much hidden where he has been linked up with various strings of Hollywood beauties.

The singer is linked to a number of famous actresses since he separated from beauty queen Olivia Culpo last year. Currently, he is hooked with British actress. His fans are assuming that he is going to marry his new girlfriend. Let’s find out his relationship with a new girlfriend.

It looks as if he is already on the spark of 26-year-old British stunning actress lily Collins. They first met in 2009, while working together at the 'Nickelodeon Kids choice' awards In Los Angeles.

According to the reports, the duo went on a bowling date. They went skiing together to mammoth, California, a five-hour drive north of Los Angeles.

Eventually, Nick confirmed he has enjoyed a number of dates in recent months with the daughter of Music Legend Phil collins.

A few months ago during an interview with British newspaper, Nick told “We went out a couple of times and she is amazing. We have known each other for many years just working on the same circle".

However, Lily’s dad Phil collins insisted his daughter was just friends with the pop star and it never becomes serious, while talking to Yahoo!.

It is still not confirmed by the duo regarding the information of their marriage. Though their relationship is confirmed but it seems it still takes some time to find out about their marriage. Maybe Nick will get married to Lily Collins.

As we already told you Jonas personal life is not that much hidden. He is almost open in all his affairs and relationship.

Till Now, he has been linked up with various Hollywood actress and celebrities including Miley Cyrus, Olivia Culpo, Kate Hudson, Nicole Gale Anderson, Selena Gomez and few others. He is a man with open thoughts towards his relationship.

Prior to Lily Collins, there were rumors of him dating Barbara Palvin. Though he is dating Lily Collins but he thinks he has an unbelievable connection with former flame Kate Hudson.

Nick Said: "Kate’s Incredible and a great person. He had an unbelievable connection with two humans who just admire things about each other and sees something that’s beautiful in each other and continued praising an actress to the paper.

Nick is back again on the market after dating Olivia Culpo and last year he split with her. During his interview, he said the difficult break up always serves as an inspiration for many of his songs including track chainsaw, which he recorded at his home.