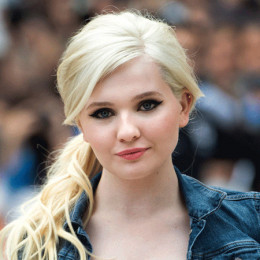 An American actress and singer Abigail Breslin is known for starring in movies like My Sister's Keeper, Zombieland, No Reservations, and Nim's Island. She is the daughter of Kim Breslin and Michael Breslin. When she was just three years old she was featured in Toys "R" Us commercial. She debuted in the film industry from 2002 movie Signs where she played the role of Bo Hess. She had also short role in The Princess Diaries 2: Royal Engagement. She has starred in FOX horror and comedy TV series Scream Queens. In 2007 she was nominated for best supporting actress making her 5th young actress to be nominated at the young age of 10 years.

Talking about her personal life, she has not married yet but that doesn't mean she is still single. Currently, she is not available. She has been dating a guy named Ira Kunyansky. According to source, they are maintaining a very low profile regarding their relationship.

She frequently posts images with her boyfriend via Instagram where she has 514k followers as of 2019.

“Come here we need to take a cute selfie.”

Her boyfriend surprised her with an enormous teddy bear for Valentine's Day in 2018.

I asked my boyfriend for a teddy bear for Valentine’s Day and he got me the teddy bear of all teddy bears and couldn’t wait until Valentine’s Day to give it to me... so basically he won Valentine’s Day this year. Even tho now I will probably cuddle this bear more than him now... jk (maybe) #thispostissickeninglysweetbutimeanjustlookatthatteddybear

She posted an image with the teddy bear and wrote:

"So basically he won Valentine’s Day this year. Even tho now I will probably cuddle this bear more than him now … jk (maybe)"

Breslin previously opened up about her sexual assault on the occasion of 'Sexual Assault Awareness Month' in April 2017. She revealed that her ex-boyfriend raped her and ever since, she's been diagnosed with PTSD.

i knew my assailant. #SexualAssaultAwarenessMonth #breakthesilence

She received a huge love and support from her fans. Further, she took Twitter to thank all her admirers.

so beyond thankful by the immense support regarding my IG post last night. I am so lucky to have all of you kind souls in my corner.

Breslin has an estimated net worth of about $16 million as of 2019.

She has two elder brothers namely Spencer and Ryan who are also actors. Her father belongs to Jewish descent.

She performed in the first commercial when she was 3. She signed a movie named Signs in 2002 at the age of 5.