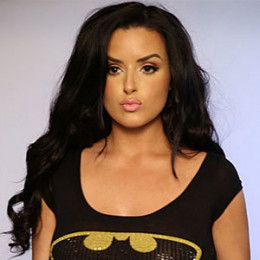 American glamor model, social media personality, and actress, Abigail Ratchford attended Catholic grade school as well as Jesuit University. Ratchford has been featured on various Sports Illustrated Swimsuit website. She has appeared in a six-page print spread in a popular Australian men's magazine, and also Esquire, Zoo Weekly, Nuts, Maxim and Playboy. Abigail has also made a name for herself on the small screen with multiple guest roles on ABC, E! and most recently, NBC's Parks and Recreation.

Abigail Ratchford was born on 12th February 1992 in Los Angeles, California with the birth sign, Aquarius. She is the daughter of an attorney father and a local childcare owner mother. She was raised along with her five siblings. Talking about her ethnicity, she belongs to Irish, German and French descent and her nationality is American.

Each of her siblings is a parent of five or seven children. She has around 54 cousins. When she was a child, she wanted to be a devout vegetarian.

Regarding her academic qualification, she finished her schooling from Catholic grade school and Catholic High School. After that, she graduated from a Jesuit University. From the very early age, she was interested in modeling.

From the age of 20, in 2012 she took part in Miss Pennsylvania but did not win the title. After that, she posted several pictures on social media which helped her to grab much of the fan following and now has around 8.1 million followers on Instagram.

Moreover, she featured on the Sports Illustrated Swimsuit website and other local modeling agencies. She then started appearing in different magazines as well including Playboy, Nuts, Esquire, Zoo Weekly and much more.

Ratchford was doing great with her career but was not so satisfied so to gain more she shifted to Los Angeles for modeling and acting. After reaching there, with her hard work, she featured in many billboard campaigns on Sunset Boulevard.

Moreover, she also appeared on TMZ on TV, an American syndicated entertainment and gossip news TV show after which she was nicknamed The Sweetheart for her sweet nature. Being such an amazing model, she also walked the runway for Stello McCartney 2017, LA Fashion Week and many others.

Abigail Ratchford is often seen with James Peperno, a business person, but the couple denied the facts. But it came out that they were actually dating in their past.

Furthermore, she previously dated Jamie Iovine, the son of millionaire American record and film producer, Jimmy Iovine. The couple met in 2014 and split in 2015. He was insecure with Ratchford going to late night parties and appointment. So they ended their relationship as girlfriend-boyfriend.

Later on, she was also rumored to be dating an American football player, Johnny Manziel as were spotted leaving together in the same car. But both of them strictly denied the rumored and addressed each other as just good friends.

So, as of now, she is dating no one so is probably single.

As for her body measurement, she has 36DD-24-36. She stands at the height of 5ft 8inches. She has green eye color and Dark Brown hair.

One of the glamorous models of the country, Ratchford earned much from her modeling. Apart from that’s she received $170,000 per year from the endorsement on the Instagram. Currently, she has over 8.1 million followers from which she can make up to $8,500 per post.

Regarding her income, she earned $2.9 million annually and successfully maintained a decent amount of $5 million of net worth. For the post that stays on the site for 48 hours, she charges $3500. As for Snapchat, she earns around $1500.

Moreover, she owns a beautiful home in Beverly Hills which contain glam room as well where she takes most of the pictures.