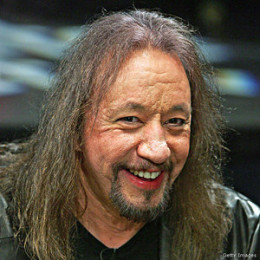 Paul Daniel Frehley, commonly known as "Ace Frehley" is a musician and songwriter, best known as the founder and former lead guitarist of the American hard rock band "Kiss". He made his debut as a vocalist through the song ‘Shock Me’ of the album ‘Love Gun’. His father, Carl Daniel Frehley is from Pennsylvania and his mother, Esther Anna is from North Carolina. His father was an electrical engineer and mother was a homemaker.

Accounting his personal life, till now he is married only once and has raised a daughter with his wife. He married his wife in 1976 but due to some misunderstanding, they got separated after some years.

He had dated several ladies in his past days and was rumored of dating Diane Cusano, Britney Stevens and many more. Currently, he is engaged to a beautiful woman with whom he is spotted at various shows and events.

He released a recent solo album Spaceman in October 2018 that made him as the 14th Greatest Metal Guitarist of All Time.

She is the first wife of Ace, with whom he has welcomed a beautiful daughter. Details about their divorce is unknown.

She is the only child of Ace, whose current status is unknown.