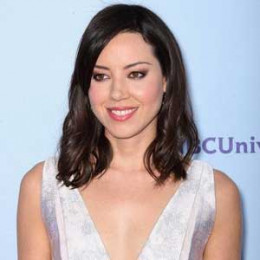 Aubrey Christina Plaza is an American Actress as well as a comedian most known for her deadpan style. She is recognized for her role of April Ludgate on the NBC sitcom Parks and Recreation. As a fruitful result of her hard work Plaza got the lead role in 2012 comedy Safety Not Guaranteed after appearing in supporting roles in several films.

Aubrey Christina Plaza, known as Aubrey Plaza is an American actress born on  June 26, 1984. She was born in Wilmington, Delaware, to father Bernadette, an attorney, and mother David Plaza, a financial advisor. She grew up with her younger sisters, Renee and Natalie. Her father is Puerto Rican and mother Irish, hence, Aubrey is of mixed descent. She was raised as a Roman Catholic.

Plaza completed her high school from all-girls Catholic School whereas graduated from Ursuline Academy and New York University's Tisch School of the Arts. She was a student council president in high school. Aubrey once suffered from stroke causing her temporary paralysis and aphasia when she was at NYU.

Aubrey did internships in many places like Samba Post-Its and NBC Page before starting her acting career. At first, she performed at the Upright Citizens Brigade Theater portraying improv and sketch comedy. She then starred in the online series The Jeannie Tate Show in 2007.

In 2009, she made her film debut in supporting role in film Funny People. After that, she featured in a series of films including Scott Pilgrim vs. the World and Life After Beth. She earned her first lead role in Safety Not Guaranteed in 2012.

Aubrey appeared as a guest judge on Portlandia in 2011 during a roast segment on The Next Food Network Star. She also performed at "A Night of 140 Tweets: A Celebrity Tweetathonf to Haiti".

Moreover, Plaza appeared in music videos like Father John Misty's "Hollywood Forever Cemetry Sings"  and Cassorla's "Bona Fide" in the year 2012 and 2014. She also voiced for a commercial for Apple iPhone 6s in 2016.

As of 2017, Aubrey has an estimated net worth $3 million. She is earning a massive fortune from her acting career.

The skillful actress Plaza was previously in a relationship with actor Michael Cera in 2009. The duo met on the set of Scott Pilgrim vs. the World. According to Aubrey the two nearly got married in Vegas in 2010 but their relationship lasted only a year and a half.

Aubrey is currently in a romantic relationship with writer/director Jeff Baena since 2011. The couple is spotted staying and working together most of the time. Well, the couple seems happy together.

However, Plaza stated that she is bisexual in an interview with The Advocate in 2016. This statement has raised a big question mark regarding her sexuality.