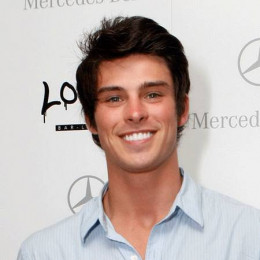 He is a model and actor, best known for playing on the CBS soap opera "The Bold and the Beautiful", as Thomas Forrester and as a lead character in the 2014 film Saints and Soldiers: The Void. He studied at Oak Hills High School and from there he graduated in 2006, and later joined Northern Kentucky University but dropped out as he wanted to pursue his career in acting. He is a model at Nous Models.

Moving on to his personal life, he is now married to his long time dated girlfriend with whom he has raised a son. The couple is together since 2009 and till now they have the same bonding and mutual understanding as they used to have in their past days so there no sign of their divorce. Before his marriage, he has dated an actress and also was rumored of dating another Canadian actress.

She is the very first and the current wife of Adam. The couple is together since September 2009.

She is the very first and the current wife of Adam. The couple is together since September 2009.

He is the first child of Adam who was born safe and healthy in Los Angeles, California.