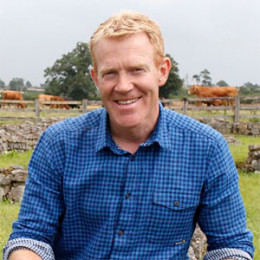 Adam John Lincoln Henson is an English farmer, television presenter, and author. He is best known as a presenter on the BBC's program called Countryfile programme. He also worked on other BBC programs such as Farming Today, Gardener's World, and Nigel and Adam's Farm Kitchen. As a writer, he has written few books based on farming.

Adam Henson was born on 8 Jan 1966, in Gloucestershire, England. He is the son of Joe Henson. His father is a farmer and founder of Rare Breeds Survival Trust. His father has presented a countryside TV programme alongside Angela Rippon and Phil Drabble.

Henson has three sisters with whom he grew up and helped their father's farm. It was the first domestic rare breeds farm to open to the public.

Henson's granny Leslie Henson was musical comedy comedian and actor. Since the early days, he was involved in farming and worked at the Chatsworth Estate as well. He earned an HND in Agriculture from the Seale-Hayne Agricultural College in Newton Abbot, Devon.

Henson's career began after his graduation when he met his business partner and friend Duncan Andrews. They both traveled for more than a year through Australia working on arable stations and sheep. He then returned to a plantation for kiwi in New Zealand. Later, they moved to Atherton Tablelands in Queensland to plant tea.

The pair returned through Canada and California after diving on the Great Barrier Reef. Currently, Henson runs the Cotswold Farm Park that was built by his father in 1998. The partners now jointly run the 650-hectare estate, growing spring barley, wheat, and oilseed rape along with numerous rare breeds of farm animals.

Adam Henson began his television career in 2002. He landed a position of the presenter on the BBC's program, Countryfile. He worked on programs such as Countryfile Summer Diaries and Inside Out during that time. He also worked on BBC Radio 4's On Your Farm and Farming Today due to his extensive experience in farming.

Henson is the joint presenter with Kate Humble in BBC 2's farming program, Lambing Live. He has an extensive presenting portfolio and has served as a presenter on BBC's Gardener's World Live in June 2010. He interviewed for the web series, Carpool.

Henson disclosed that he was threatened against his children at a farmer's conference in St. Mellion after he presented about badger culling on Countryfile.

Adam Henson is unmarried but has two children. As far as his work on television, he is a farming expert with more than 50 flocks of rare breeds.

Henson is currently in a live-in relationship with Charlie Gilbert. The pair knew each other from their schooldays. Since their marriage, the couple shared two children named Alfie Henson and Ella Henson.

Henson currently resides at his birthplace at Bemborough Farm, Gloucestershire with his family. He is quite close to his family and has opened up the sadness he felt since his father's death. He cited his father as his mentor, hero, and source of inspiration.

Adam Henson Charlotte Henson was in a relationship with Charlie Gilbert. Since their relationship, the couple is living a happy life together and shares two children together.

Alfie is the first child of the couple.

She is the second child of the couple.