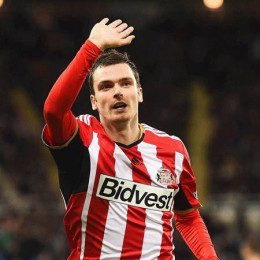 He is a professional football player who plays for the National football team and Sunderland as a winger. He Studied at Easington Community Science College and is a student of Middlesbrough youth academy. He made debut in a UEFA Cup game at the age of 17 and then came to prominence. He has earned 12 caps at senior national level and has played at various levels for the country. He has played from various footbal clubs such as Watford, Middlesbrough, Leeds United,Manchester City.

Talking about his personal life, he is currently in relationship with his girlfriend with whom he has a lovely daughter. Till the date he is unmarried. There is no any record of his past affairs and his other such activities as it is obvious he might have dated a lot of beauties. Controversy arose when he was arrested by Durham Police on suspicion of having sexual activity with a 15-years old girl.

Her details has not been disclosed yet. She currently lives in Castle Eden, County Durham with her beloved parents.