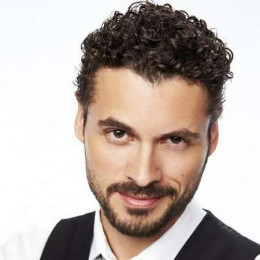 He is a Mexican actor, noted for his portrayal as Sunspot in the 2014 superhero film X-Men: Days of Future Past. On television, he played the role of Paul Torres on the Fox drama series, The Following and starred as AJ Menendez in the short-lived ABC prime time soap opera, Blood & Oil.

Adan Canto Personal life; Is he Dating anybody?

Accounting his personal life, Adan Canto is reportedly in a relationship with a fellow actress, named Stephanie Lindquist. The couple might have some plans of marrying and living the rest of their life together.

Actually, he has stayed a total low profile when it comes to his personal life as he is very reluctant in this matter.

Adan reportedly revealed he and Stephanie are kinda dating when he shared a picture of her on his Instagram. And the caption raised many people eyebrow.

The pair has been staying very low profile when it comes to their relationship. He rarely shares pictures with her and whenever he does, he makes sure to call her his wife.

Enjoyed the loveliest run with my lady this morning. Beautiful #Carmel #California

And the biggest shocker for his fans came when according to the website, The Knot, the couple had already gotten married on June 17, 2017, in front of their close friends and family.

The couple is yet to share any children between them.

Adan Canto was born on December 5th, 1981, in Ciudad Acuna, Coahuila, and as of now, he is 37 years old. He is the son of his parents who raised him.

From an early age, he was always very interested in acting and took on several movies and small screen projects before hitting it big.

In 2015, he played the role of Minister Lara in the TV series, Narcos.

Adan Canto is one of the successful actors in the Hollywood Industry. He worked in big-budget movies and TV series like X-Men, Narcos, Blood & Oil, The Catch, among many others.

All of his movies have earned several millions of dollars in the box office which directly implies he also earned thousands of dollars.

At the moment, his current net worth is around $2 million.