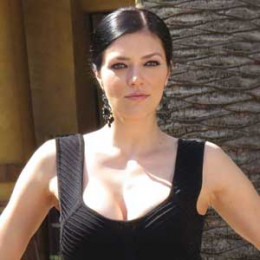 Adrianne Curry is the winner of the first season of America's Next Top Model. While modeling for Playboy, she has listed in top 25 sexiest women. She was also listed in hot women's list. She is an animal lover and has two pets- cat named, Ziggy and snake named, Regina.

Adrianne Curry was born on 6th August 1982 in Joliet Illinois as Adrianne Marie Curry. She was raised by her mother, Christine Curry and also has a brother, Nick Curry. Adrianne is the citizen of the United States of white ethnicity.

Curry had worked as a waitress before she became a model. Her journey in modeling started from America's Next Top Model. She earned immense fame after winning the title. It was the first step towards the success of her life. After that, she used her skill in low-profile public appearances by posting several makeup tutorials.

Moreover, she was appointed as a model by Wilhemina Models of United States and had done modeling for many magazines such as- Famous Stars, OK!, Macy's Lucky, People, Marie Claire, US Weekly and so on. Besides these, Curry also appeared in several commercials as well.

After winning the first season of television series, she modeled nude for Playboy in 2006 and 2008 edition.  She co-hosted a television game show named, Ballbreakers. Curry also appeared as a celebrity panelist on Gameshow Marathon on the episode of Match Game.

The sexiest model, Adrianne met her former husband Christopher Knight in the show, 'The Surreal Life.' Soon after the completion of the show, they started dating each other.

Later on, in 2006 the pair got married and in the second season of the show, My Fair Brady they presented themselves as a married couple. They had a huge age difference. Later on, in 2012 they divorced, and the news was also announced in Dr. Phil Show. She is currently single.

Curry has done breast enlargement surgery to increase her breast size. This surgery was done to maintain the size as her right breast was smaller in comparison to other.

The gorgeous Adrianne Curry has an estimated net worth of $500,000. She had done numbers of modeling, commercials, TV shows as well. Curry was paid $450,000 by VH1 after the second episode, My Fair Brady.

Curry goes to various events, and every time her dresses are sexy and unique. Before her divorce, she and her ex-husband used to live in a house in California worth $2.5 million in 2017.

Christopher Knight, a star of 'The Brady Bunch' was married to Adrianne Curry after years of dating. Moreover, in 2012 they got divorced. They had no children during the relation.