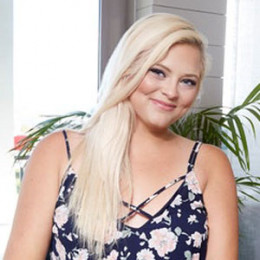 American television personality, Aimee Hall is known her for her appearance in the top-rated reality series MTV Floribama Shore’. Prior coming in the entertainment industry, she worked as a bartender at a restaurant in Alabama, named The Scrap Yard in Bay Minette. Gossipmongers stated that she's been in an on/off relationship with a mysterious guy for the past 10 years.

Aimee Hall was born Aimee Elizabeth Hall on 1st October 1992 in Perdido, Alabama. She is American and belongs to white-American ethnicity.

Hall graduated from the Baldwin County High School and she's pretty close with her mother. She has adorable cousins with who she shares pictures on her Instagram.

Aimee Hall worked as a bartender at The Scarp Yard during her initial days. She rose to stardom after starring in the TV series, MTV Floribama Shore in 2017 which was a resurrection concept of the famous ‘Jersey Shore’. The show set is in Panama City Beach and it premiered on 27th November 2017.

Hall joined the show right after her breakup from her longtime boyfriend of 10 years. She arrived at the house on the first episode of the show. Hall appeared on all episode of the show along with other housemates including Nilsa Prowant, Jeremiah Buoni, Kortni Gilson, Codi Butts and Candace Rice.

Hall will also appear in the second season of the show which is set to premiere in summer 2018. MTV has recently announced that it has renewed the show for a 20-episode second season.

According to a few reputable online sources, Aimee Hall’s estimated net worth is in six-digit-figure but the exact amount is still unknown. Hall is living a lavish life in Los Angeles. She owns expensive cars and gadgets. She also did products promotion on her Instagram from where she earns a good sum. Often, Hall goes on an extravagant vacation in different countries.

As per some online tabloids, an Instagram user having followers in range of 50k to 200k makes around thousand dollars per post. As of February 2018, Hall has more than 75K+ followers on Instagram. So we can assume that she makes thousands of dollars per month.

Aimee Hall is possibly single. Previously she was in a ten-year-long relationship with her boyfriend until she called it quits after finding that her boyfriend impregnated another woman.

She split with her boyfriend but she has not revealed her ex-boyfriend’s name yet.

Later it was found that her ex-boyfriend also cheated on her with her cousin.

So, Hall ended the relationship with her ex-boyfriend. When she appeared on the show she stated about how she wants to move on. She said:

I just got out of a really bad relationship, for 10 years and to be honest, I just needed a break from home. I had applied for ‘Party Down South’ a year ago, and I didn’t get that. But I had just prayed, ‘God, send me on the road. I’m ready."

Hall is a bit outspoken with outgoing personality and most of her fans love to see her on the show.