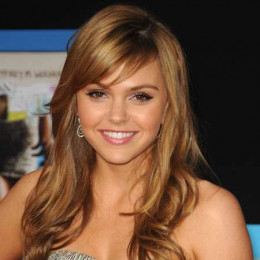 An American actress, model and producer who is better known for starring as Julie Taylor on the television show Friday Night Lights. She was 16 years old when she completed graduation from high school through independent study. She started her career as model for Hollister, Old Navy, Alltel, Tommy Hilfiger, and YMI Jeans. She has made guest appearance in several television shows like Ned's Declassified School Survival Guide, Cold Case, and Disney Channel's Hannah Montana. She has also appeared in the musical video of Hinder song "Without You". In 2015 she was signed for F. Javier Gutiérrez's horror film Rings.

Aimee Teegarden was born on October 10, 1989 in Downey, California, U.S. She graduated from the high school through independent study at the age of sixteen.

Aimee Teegarden started her career as a model. She joined the cast of the NBC drama, Friday Night Lights. She also  guest-starred in three episodes of The CW's 90210.

Aimee Teegarden isn't married yet but she is in relationship with her boyfriend who is also an actor. Their relationship came into light of media after they were seen together posing in a photo-shoot.