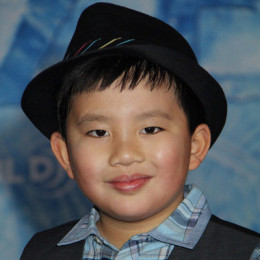 He is an American child actor, best known for portraying as Bert Harrison on ABC's critical darling comedy series "Trophy Wife". His first TV debut was on CBS' smash hit series "How I Met Your Mother" and then later became part of Trophy Wife. At the age of 9, he became the youngest actor to be nominated for 2014 Critics' Choice Television Awards. He speaks fluent Mandarin.

Details about his personal life has been a bit of low profile. Details about his birthday and place is a bit of unclear. As he is just a kid so there is a rare chance of him having a girlfriend but it's just a assumption. He has got a busy schedule and have to manage his timings for his family, school and his project, so he has been working hard for his stable future and has got plenty of time for the romance. .