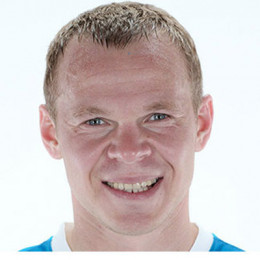 Aleksandr Anyukov is a Russian National Football Team defender, who has played for Krylia Sovetov in the beginning years of his pro career before joining Zenit Saint Petersburg. Starting football school at a mere age of six, he has been able to get the spot on the national team for Euro 2004,2008 and 2012. He has won one UEFA Cup in his career while he was in Zenit Saint Petersburg.

Aleksandr Anyukov is rumored to be dating a Russian model, Daria Valitova since 2016.

Anyukov maintains his personal life far from the media and fans.

More centred on his football career than his personal life, his cap achievements include 18 appearances in the second division, 71 for Krylia Sovetov in first division, and total 211 appearances for Zenit Saint Petersburg, with one win in UEFA Super Cup, one in UEFA Cup, two in Russian Premier League, one in Russian Cup and two in Russian Super Cup with his team.