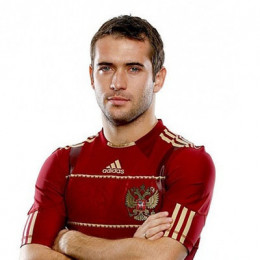 Aleksandr Kerzhakov is a Russian football team striker, and a striker for Russian international football club Zenit St. Petersburg. He is one of the highest goalscorers in the history of Russian football. He is the highest goalscorer for Russia, and has appeared on two World Cups and two European Championships, and a total of 85 caps. He is now planning to coach a team.

He left home when he was 11, and struggled to be a successful footballer. His club career started and ended at Zenit St. Petersburg, with games played for Sevilla and Dynamo Moscow in between. He has entered national team as an under-21 player, and went on to be included in the national team since the 2002 World Cup. He has a fruitful international career.

Kerzhakov and Marai have a little daughter named Darya Aleksandrovna Kerzhakova, who lives with Kerzhakov currently. Though her parents are separated, she seems happy with her father. Marai did not have much interest in football and the reason for their separation is not disclosed.

She lives with her father. She has an influence of her father on her. She is smart, sporty and socializing. Aleksandr Kerzhakov has raised his daughter very well.