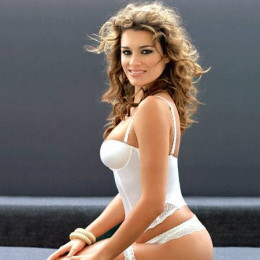 She is a Czech model and actress who is currently residing and working in Italy. She started her modelling career when she was in tender age of 15 years old. She was also first runner-up of Miss Czech Republic which was held in 1998. She has also co-hosted the TV shows Torno Sabota. She has already been featured in popular magazines like Penthouse Europe, Playboy Europe, and Quo. Talking about her acting career she has been starred in the movies named I Have Seen The Stars and Christmas in Love. She is also co-owner of Italian clothing-line Baci e Abbracci.

Exploring about her personal life she was married to Italian national football goalkeeper. They were very happy together sharing happiness and romantic relationship. Together they were parents of two sons. But their relationship didn't work out well and got divorced. She is currently in love with her present lover who is occupationally a lawyer. There is no rumor of any kind of other affair of her beside him. It seems like she is going to move with him soon.

Professionally, he is an Italian national football goalkeeper. Together they are the parents of two sons. Reason behind their divorce is still unknown.

He is the eldest son of the family and son of Italian national goalkeeper.

He is very cute and adorable. He was born in in Milano, Italy.