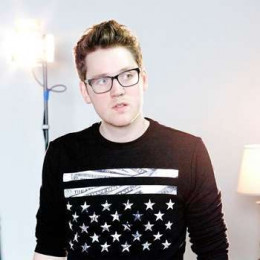 A singer, songwriter, and multi-instrumentalist, Alex Goot is a one man pop rock and acoustic band from Poughkeepsie. He provides the vocals, drums, guitars and keyboards for all his own songs as well as other covers of classic and modern pop songs. He began recording music in 2004 at the age of 16 and since then he has gained popularity from his profiles on a website such as YouTube, Purevolume, and Myspace. Goot grew rapidly through the channel lists YouTube Top 200 with his covers of famous songs including his original song 'Sensitivity'. According to Goot, his inspiration is to show the love he has for music. His YouTube channel has about 2 Million subscriber and his videos are viewed 300 million times.

Goot is engaged to a pretty girl who is also known as 'YouTube Beauty Guru'. She posts beauty and style related tutorials on YouTube. It is known that he proposed her on the beach with a complete setup of the pillow, blankets, and champagne. And wrote the song "Unstoppable" about her and played it during the proposal. He even uploaded the actual proposal video on YouTube. They are seemed as if they were made for each others.