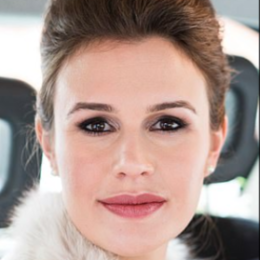 Alexandra Zarini is immensely popular as the descendant of Gucci's multibillion-dollar fashion house. Other than that, she has been the Alexandra Gucci Children's Foundation owner, which began its work in 2020. In September 2020, she broke the headlines when she accused her former stepfather of molestation.

Alexandra Zarini is a married woman who blissfully walked down the aisle with her long-term partner Josef Zarini in April 2016 after dating for nearly two years. Thousands of guests attended Alexandra and Josef's lavish wedding ceremony.

In 2020, Zarini explained how she is financially independent after leaving Sierra Tucson. She became financially stable for a few months when her mother assisted with her rent.

Before fame, Alexandra engaged in a family business and art gallery regardless of not having a college degree. Zarini stayed at home with her kid in 2016 while her spouse took care of the family.

Alexandra, the great-granddaughter of Guccio Gucci and granddaughter of Aldo Gucci, filed a lawsuit against her three family members in Los Angeles on 10 September 2020. According to Alexandra, her former stepfather, Joseph Ruffalo sexually assaulted her from age six but her parents did not shield, or protect her from abuse.

British police investigated the Gucci fashion family after heiress Alexandra accused her stepfather Joseph Ruffalo of molesting her at her Ascot home for several years. She filed a lawsuit against Ruffalo for physically assaulting her for years, from when she was aged six to age twenty-two. 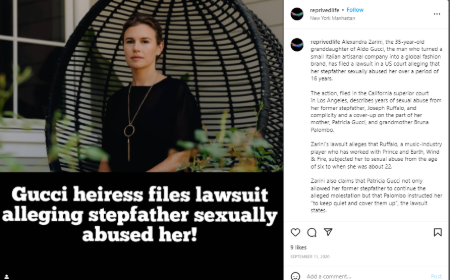 Zarini explained that her mother Patricia and grandmother Bruna Palomba were aware of the abuse from Mr. Ruffalo, yet they still threatened to disown her if she did not remain quiet about it. Ruffalo refused all those allegations and clarified he was innocent.

Alexandria believes Ruffalo blackmailed her mother Patricia, and her fear of facing the same fate as her grandfather probably guided her decision to remain quiet. In addition to the lawsuit against her mother, grandmother and former step-father Joseph Ruffalo, Alexandria further made complaints against Beverly Hills Police and the Riverside County Sheriff's Department.

What is Alexandra Zarini's Net Worth?

Alexandra Gucci Zarini has summoned an estimated net worth of multimillion dollars as she bagged huge chunks from her job at and as an heiress of the Gucci brand. At the same time, Zarini serves as the founder and board chairperson of Alexandra Gucci Children's Foundation. In addition, she had been an advocate for the protection of children worldwide. 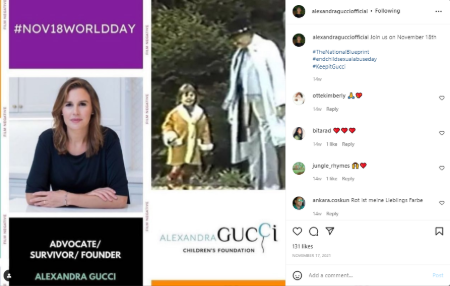 Alexandra Zarini is an heiress of the Gucci family brand. SOURCE: Instagram

Zarini runs a Youtube channel titled Alexandra Gucci Children's Foundation, which has over 467 subscribers and 109,551 views. Alexandra joined the YouTube channel on 10 September 2020.

Josef Zarini and Alexandra Zarini have been happily married for more than seven years. They tied a knot in April 2016 and have become inseparable ever since.

Alexandra Zarini gave birth to the couple's first child in 2015 with husband Josef Zarini. The child is probably six to seven years old.