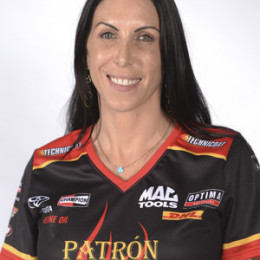 Alexis DeJoria is an American car racer and actress. She is a member of Kalitta Motorsports. DeJoria, driver of Toyota Camry funny car is sponsored by Patrón Spirits Company. She began her career in 2005. In 2014, Alexis became the first woman ever to make a sub-four second run, with a 3.997-second ET In Pomona, Calif.

Alexis DeJoria married American television personality and motorcycle customizer Jesse James. They started dating from 2012 and tie the knot after one year. The couple married on 24 Mar 2013 in Malibu, California, United States, after 2 months of engagement.

DeJoria has a daughter named, Isabella DeJoria who was born in 2003 from a previous relationship. Alexis and her mother Briggs joined Sallie Latimer's efforts to raise money for repairing the Earles Court water tower.

Alexis DeJoria holds an estimated net worth of $100 million.

Alexis DeJoria was born on September 24, 1977, in  Venice Beach, California, the U.S. to John Paul DeJoria and mother Jamie Briggs.

Alexis DeJoria married to American television personality and motorcycle customizer Jesse James.T After 2 months of engagement, they married on 24 Mar 2013.

DeJoria has a daughter named, Isabella who was born in 2003 from a previous relationship. She has not disclosed any information about her past relationship.