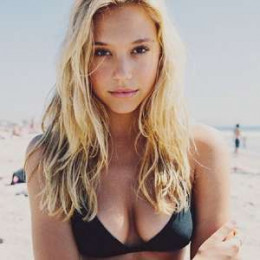 An American model and social media personality, Alexis Ren is quite popular on Instagram with more than 13 million followers. In March 2018, she featured in the cover of Maxim Mexico.

Alexis Ren is possibly single at the moment. Previously she has an affair with Jay Alvarez. But, shortly after the couple broke up.

Ren is quite popular on Instagram with more than 13.1 million followers.

Alexis Ren holds an estimated net worth of $3 million.

Alexis Ren was born on  November 23, 1996, in Santa Monica, California. She is a daughter of Cynthia Gaylord and Frank Gaylord. Her father is a lawyer and mother was a health nutritionist.

Ren began her modeling career at the age of thirteen for Brandy Melville. She modeled for many brands among them are Calvin Klein, Soriya Swim, Forever 21, Nasty Gal and so on.

The model has appeared twice in Nextdoor model magazine. She also signed with Chic Management in Australia. At the age of fourteen, she signed with Nous Model Management. She is famous after shoots with Lucas Passmore age of sixteen. She also works for Surfing Magazine swimsuit.