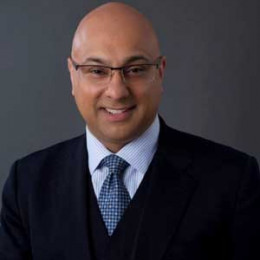 Ali Velshi is a well recognized Canadian Journalist and TV host. Ali is one of the powerful and respected media personality of all time, best known as Chief Business Correspondent for NBC News, and anchor of MSNBC Live on the news division's cable network, MSNBC. His charismatic personality and style of work have even earned him a huge fan following. Ali is a highly admired figure in journalism and appreciated by enormous institutions for his outstanding work in the field.

Ali Velshi was born on October 29, 1968, in Nairobi, Kenya. He was raised in Toronto, Ontario, Canada by his mother Mila Velshi, who was from South Africa and his father Murad Velshi, the first Canadian of Indian origin to be elected to the Legislative Assembly of Ontario. He grew up as an Ismaili Muslim and his ethnicity is Gujarati Indian.

Faris received his primary education from the ‘Northern Secondary School’ in Toronto. At that time, he was elected as school president. Ali Velshi attended his higher education from Queen's University and earned a degree in Religious Studies in Kingston, Ontario. During his high school days, he organized protests against Preston Manning and Canada’s Reform Party.

Ali Velshi started his career as a General Assignment reporter for CFTO channel in Toronto.  In 1999, he joined the Canadian business channel “Report on Business Television” which is now known as “BNN-Business News Network”. He came to limelight when he joined business news channel CNN in New York City.

Velshi became famous after hosting 13 hour-long episodes of The Turnaround, a reality television show, during which he traveled across America, introducing small business owners seeking to grow their businesses, to high-profile mentors who helped the small business owners develop a plan for success. For his most promising works, Velshi was awarded the Queen's University Alumni Achievement Award.

Talented Journalist also published a couple of books like 'Gimme My Money Back: Your Guide to Beating the Financial Crisis’ and ‘How to Speak Money: The Language & Knowledge You Need Now’. Currently, he has a busy work schedule as a news reporter.

Famous journalist Ali is a married man. He is happily married with the love of his life Lori Wachs, a New York-born hedge fund manager and the president of Philadelphia-based Cross Ledge Investments.

Velshi met Lori at one of Ali’s shows where she was invited as a guest. This was his second marriage prior to this he had already been in married relation during his 20's but the information about his first wife is hidden.

The pair is happily married for almost 8 complete years with no signs of getting a divorce. They are yet to have children and start a family.

Ali is a well-established journalist of the current time. During his career, he has achieved the highest name and fame. As a reporter, he has often gone an extra mile to make the people conscious about the happenings around the world.

He is living with his wife in Ontario and spending a very luxurious life. As of 2017, Ali's current estimated net worth is around $500 million dollars.

Well recognized journalist and TV host Ali Velshi married to the president of Philadelphia-based Cross Ledge Investments and she was his second wife. The couple married in the year 2009 and still continuing their relation as a happy couple.