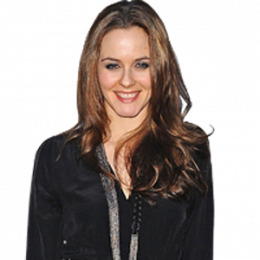 Alicia Silverstone is an American actress, known for her role in the movie, ‘Clueless.' She began her acting career from a very young age & went on to become a teenage sensation and an idol. She married Christopher Jarecki in 2005, and with his wife, he welcomed a son, Bear in 2011. As of now, she divorced her husband, Christopher and is living a single life.

Alicia Silverstone was born on October 4, 1976, in Hillsborough, California. She belongs to White-American ethnicity and is the daughter of Monty Silverstone and Deirdre Radford. She has a half-brother & a half-sister from her father’s previous marriage.

Silverstone had a typical upper-middle-class rearing and raised in the town of San Francisco. At the age of six, she began modeling and consequently appeared in her first TV commercial for Domino’s Pizza.

Silverstone went to Crocker Middle School and San Mateo High School. She earned her first accredited role in the show, ‘The Wonder Years,' as a young actress playing the character of ‘Jessica Thomas’ in 1992.

Alicia Silverstone earned the role of a protagonist in the movie, The Crush which released in 1993. Her acting garnered the praise of critics and audiences, going on to win accolades for her role. In 1993, she broadened her career to TV films, Torch Song & Scattered Dreams. The following year she starred in the TV film, Cool and the Crazy.

At the TCA press event with @mena13suvari @thejenbartels and @kylerichards18 talking about our new show #AmericanWoman that's coming to @paramountnetwork on June 7th!

In 1995, Silverstone earned her biggest break when she appeared in a hit movie, Clueless as Cher Horowitz. She immediately signed a deal with the Columbia-TriStar worth $8-10 million. The same year, Silverstone also starred in Hideaway, The Babysitter, and Le Nouveau Monde which made 1995 an extremely busy year for the actress.

From 1996 to 1998, Silverstone was cast in the movie; Batman & Robin, True Crime’, and Excess Baggage. She was also seen as herself in an episode of the TV show, Wildlife Vet. Around this time, Silverstone also did roles in TV series like Queen B, The Singles Table, The Bad Mother’s Handbook and Pink Collar.

She once again returned to the world of music videos with her appearance in Her Diamonds a song by Rob Thomas. She's been associated with theater acts and appeared in a theater show titled, Time Stands Still from 2009 to 2010.

Alicia Silverstone is single as of now, but, she was married to her long-time boyfriend, Christopher Jarecki, an American musician, radio show host as well as an actor. They tied the knot on 11th June 2005, after eight years of relationship.

In January 2011, the couple announced, they're expecting their first child and the same year, Silverstone gave birth to a baby boy, Bear Blu Jarecki. They currently live in Los Angeles at an eco-friendly house.

Sweet Elvis and Bear. We had such a lovely time hanging out with @ellenfisher and family. Sandy and Elvis are delicious and we can’t wait to meet your little girl. So sweet how they played together. Such good vibes. And thank you @andrewfisher44 for the yum pizza we can’t stop thinking about. We had a lovely time hanging out all afternoon, then we said our goodbyes and we left and came straight back to them 15 minutes later for dinner. Ha! Couldn’t get enough. Aloha Hawaii....for now

13 years after their marriage, actress Alicia separated from husband Christopher in 2018. They are yet to reveal the reason behind their divorce.

Following their separation, she has to pay $12k per month as alimony to her ex-husband. As of now, both of them remained single.

Silverstone has written a cookbook with vegan recipes since she is a vegan herself, titled, ‘The Kind Diet.' She plans on writing two more books, ‘The Kind Mama’ and ‘The Kind Diet Cookbook.' She is an avid animal rights activist & supports PETA. She is also an environmental activist.

With an early career, Alicia Silverstone had made millions from advertisements & television commercials. Her modeling career took a new step when she was selected to join MTV.

Since then, Silverstone has received nominations & even got chosen as the sexiest female vegetarian. As of now, 2017, her estimated net worth is around $16 million.

Christopher Jarecki is an American musician, radio show host as well as an actor. He has a secretive personality.

Bear Blu Jarecki is the only son of Alicia Silverstone and Christopher Jarecki. He was born in 2011.