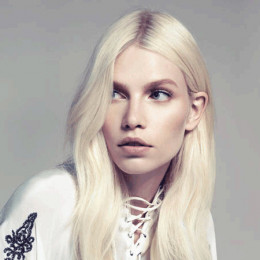 A German Brazilian model who is better known for her international runway work for Balenciaga and Calvin Klein. She was discovered by a photographer after he took picture of her and sent it to modelling agencies in San Paulo. She debuted in 2006 as runway model at enni Kayne's and Tommy Hilfiger's New York Fashion Week shows. She has advertised for popular brands like American Eagle, Derek Lam, DKNY, DTA, Dzarm, M by Missoni, Mavi Jeans, Morena Rosa Beach, Ellus Jeans, Forum, H&M Divided, Ballantyne, Cantăo, Caos, Carlos Miele, D&G, Joop! Jeans, Kurt Geiger etc. Beside modelling she has also starred in Tom Ford-directed film A Single Man.

Talking about her personal life, she is still a bachelor but that doesn't mean she is available. Sorry guys but she is already in relationship with her longtime boyfriend who is also a model. According to her, she loves to travel with her boyfriend and she is looking forward for a kissing scene with her boyfriend. She also disclosed that if it wasn't for modelling she would have been a veterinarian.