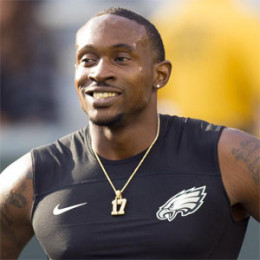 American footballer, Alshon Jeffery is a wide receiver known for his unique playing style. Started playing football from his high school and college, he emerged as a professional footballer playing for the professional teams such as Philadelphia Eagles and Chicago Bears. He has maintained the net worth in millions.

Alshon Jeffery was born on 14th February 1990 in St. Matthews, South Carolina. He is an American by nationality and belongs to African-American ethnicity. He is the son of Charles Jeffery Sr. and Deloris Jeffery.

Jeffery began his career from the very early age. At the very initial phase of his career, he played against the University of Kentucky, where he made seven catches for 138 yards with three touchdowns and five catches for 61 yards. With an amazing performance, he became the second-best single-game performer in the school history and also became third Gamecock to earn SEC Freshman of the Week in 2009 defeating Devin Taylor and Jarvis Giles.

In 2010, Jeffery played his one of the best game against Clemson making five catches for 141 yards with a touchdown. In all the 14 games he made 88 catches for 1517 yards with nine touchdowns including 8 games with 100 yards. He led his team to their first SEC Championship Game appearance only because of his performance.

In the starting of 2011, Jeffery was entitled as the best overall player in the SEC by ESPN.  Moreover, he was also named as the Capital One Bowl MVP, as he made four passes for 148 yards with a touchdown in the 2012 Capital One Bowl.

Jeffery started his professional career with the Chicago Bears in 2012. He was selected by the team in the second round of the 2012 NFL Draft. He signed the four years of contract with the team and became the first player in 2012 draft. Moreover, he made his debut against Denver Broncos.

In 2013, Jeffery made his first ever 100 yards games. Playing against Minnesota Vikings, he became the first player to make the record of two 200 yard games in the franchise history. He became the season opener for his team playing against the Buffalo Bills in 2014. He made a record with 1133 yards with 85 receptions for 10 touchdowns in the third season of his in the NFL during the year.

In 2015, Jeffery began with five passes for 78 yards against the Green Bay Packers and end it with 54 receptions for 807 yards with 4 touchdowns on 93 targets. In 2016, it was announced that franchise tag was to be tagged on him. At the end of the year, he gathered 4549 yards and 304 receptions.

Moreover, leaving the Chicago Bears he joined Philadelphia Eagles and signed a one year contract for $14 million. He debuted with Eagles in a season opener against the Washington Redskins on 10th September 2017.

Jeffery, 27, is not married yet. He has three brothers namely Shamier Jeffery, Darren Ben, and Charles Ben.

In 2014, Jeffery made an announcement of his engagement with his girlfriend, Ari Washington. His girlfriend owns a public relations firm named, Double Coverage PR Group. They were even planning to get married but later on, the couple was separated and started living their own life.

Jeffery previously had a relationship with Kellianna. The news was confirmed after he tweeted,"I have the best girlfriend in the world" on 21 April 2013 post. The couple soon had a break up.

Besides, Jeffery has not revealed about having an affair or girlfriend in the past.

Jeffery has an estimated net worth of $3.3 million. He is making such amazing money so that to maintain his lavish and high profile life. He signed a one year contract with Philadelphia for $14 million.

As per some online sources, Jeffery owns many luxurious cars including BMW, Range Rover, and Nissan. He is also a fond of traveling as used to travel various eye-catching and expensive places which shows his lavish lifestyle.