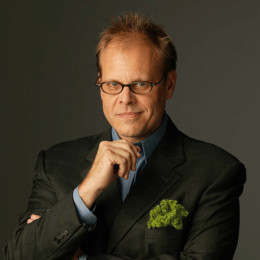 American actor Alton Brown is widely known as the creator of the Food Network's program Good Eats and host of Iron Chef America. She is a popular television personality, celebrity chef, cinematographer, and author as well.

Brown was born on July 30, 1962, in Los Angeles, California, U.S. He is an American belonging to the White ethnicity. He was born to Alton Brown, Sr. who was a media executive in Cleveland, Georgia.

Brown grew up in the Southern U.S. He attended the University of Georgia drama department in the late 80s. He worked on several music videos as a cinematographer after completing his study in the University.

Later, Brown enrolled in the New England Culinary Institute in Montpelier. He graduated from the Institute in 1997. He was a poor science student during his high school and college time.

Brown started his career as a cinematographer for several music videos, including "The One I Love" by R.E.M. He debuted in television in late 1998. He ran the series, Good Eats on Food Network. The show was nominated for the Best T.V. Food Journalism Award in 2000. The show successfully won Peabody Award in 2006.

In 2013, Brown hosted the competition Cutthroat Kitchen. In 2011, he was awarded James Beard Award for his success as a culinary television personality.

Brown currently resides in Marietta, Georgia. Talking about his personal life he was married to his longtime sweetheart DeAnna and had a beautiful daughter with her named Zoey (born in 1999). He married DeAnna Brown who is an executive producer on Good Eats.

His family members including his late grandmother, wife, and daughter also appeared on Good Eats. They were known as Alton’s Spawn in the show.

He has a deep interest in vintage watches as well. He wore different varieties of watches for every season of Good Eats.

He married Atlanta restaurant designer Elizabeth Ingram earlier in 2018. According to his Instagram post, he married his fiance in September 2018 on a boat in Charleston SC.

Our first photo post #ido. We tried to get Francis Luther and @call_me_scabigail to cooperate but Scabs had had too much bubbly. @elizabethingramstudio

The husband-wife duo frequently appears together on Brown's Instagram posts.

Brown has made an incredible amount of money from his work. He has a net worth of $13 million. He is a great motorcycling enthusiast and owns his own BMW R1150RT and is also a certified pilot. He lives in a beautiful mansion worth $3 million.

They first met each other when they were working together in TV production. Together they were parents of one daughter. Reason behind their breakup is still unknown.

She is the only daughter of him from his first marriage. She is cute and gorgeous.