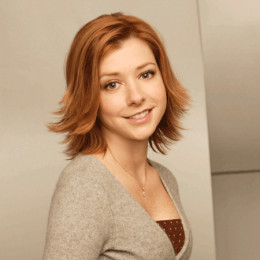 Alyson Hannigan, who is well known for her roles in American Pie film series, CBS sitcom How I Met Your Mother and television series Buffy the Vampire Slayer is a talented actress. She was born to a real estate agent mother, Emilie Posner and a truck driver father, Al Hannigan. However, her parents divorced when she was only two and she was raised by her mother. She aspired acting from her early age and pursued career in the very sector.

Alyson is a married woman and is happy with her husband. She had been in another relationship prior to her marriage however, she broke up and found her husband as her soul mate. Her husband has not been only her life partner but has also been her screen partner at times. She has two daughters with her husband and she is living a happy family life with her husband and children. She is well talked of her acting and has also won many prestigious awards.

Alyson married Alexis in 2003. They commenced dating from 2000 and after romance of nearly 3 years, they decided to spend their while life together. The couple has two children and are also godparents to one.

Satyana Marie Denisof is the first child to Alyson and Alexis. She is one of two daughters in the family and has grown up as a happy child.

Keeva is the youngest daughter in the family. She is loved by all and is cheerful child. She is three years younger than Satyana.