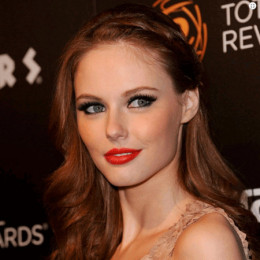 An American beautiful and gorgeous actress, fashion model and beauty pageant who was the winner of the Miss USA Pageant in 2011. she also held the title of first runner-up in the 2007 Miss Teen USA. She attended attended Freehold Township High School. From very young age she was fascinated in acting career and to pursue her career in acting she joined NY Conservatory for Dramatic Arts where she studied acting for film and television. Her career take whole new way after she was crowned Miss New Jersey Teen USA in 2007. She was also invited as the special guest in the grand opening of 1Oak at the The Mirage. She has also worked as co-host of Runway for Hope fashion show alongside with Mario Lopez. She also took part at Miss Universe 2011 in Sao Paulo, Brazil and was placed at top 16.

Talking about her personal life she has not married yet but she is in long term relationship with her boyfriend who is an actor. Recently the couple revealed that they are engaged to be getting married soon. There has been no report of any affair of her prior to be in relationship with her current boyfriend. She has not yet been a biological mother.