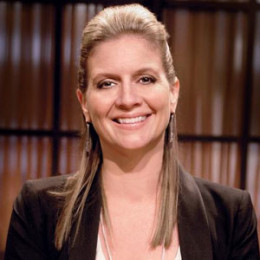 Amanda Freitag is a Chef and TV personality on the Food Network. She is also a judge on the reality competition series Chopped. Amanda inaugurated a restaurant called Cesca Enoteca & Trattoria in the year 2003. Further, she was hired by Vong, a popular New York restaurant, after completing graduation from the Culinary Institute of America in 1989. Amanda and Ty Pennington are hosting the new Food Network series American Diner Revival.

Amanda was born in Cedar Grove, New Jersey in the United States of America, on May 11, 1972. She belongs to American nationality and ethnicity wise; she is a White American. She is the daughter of Kathleen Freitag and Paul Freitag.

Freitag was brought up in her birthplace Cedar Grove with her two brothers Jason Freitag and Justin Freitag. She attended Cedar Grove High School, where one of her economics teacher, Joan Levine, suggested Amanda attend the Culinary Institute of America.

In the year 1989, Amanda Freitag later accomplished her graduation from Culinary Institute of America.

After graduation, Amanda Freitag worked under Chef Jean-Georges Vongerichten at Vong New York. Before traveled to France and Italy, she left Vong in the year 1994 to cook at Verbena. After that, Amanda opened the Upper West Side along with restaurateur Godfrey Polistina in 2003.

Freitag became a frequent judge on the culinary game show Chopped after leaving the Harrison on September 3, 2010. Moreover, she made her appearance on The Martha Stewart Show on October 16, 2009. The show hosted by Martha Stewart.

Amanda Freitag is a successful chef on Food Network’s Chopped and co-host of the television program American Diner Revival so far. Therefore, she has garnered a whopping amount of net worth from her career. Currently, her net worth is more than $3 million.

Amanda Freitag stands at the height of 5 feet 9 inches. She also has a perfect body with measurement of 33-22-33 inches. She has a light brown colored hair and blue eye.